Salt + Smoke slow smokes barbecue and makes every dish from scratch with love. 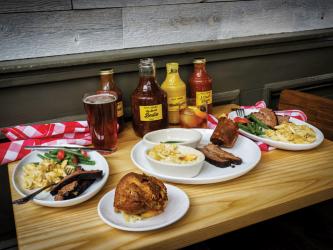 The multi-layered onion is taken for granted in many kitchens, but Salt + Smoke co-owner and executive chef Haley Riley says that at this point, the onion is his favorite ingredient. “They are so versatile, and not many other ingredients can sway from one side of the spectrum of pungent and spicy to sugary and sweet quite like they do with only the addition of heat,” he says. He likes that the onion can be smoked, grilled or caramelized.

It didn’t take long for crowds to flock to sample specialties like beef brisket smoked over post oak, and popovers, which are eggy, airy cheddar and bacon muffins served with each platter. Everything in the restaurants is handmade.

Riley says that his cooking philosophy is based around “care for the product you are working with, respect for the techniques you are utilizing and gratitude for the opportunity to nourish others. Cooking is the best way to say 'I love you.’”

The culture of Salt + Smoke’s team excites Riley. “We began as such a small restaurant, and due to many wonderful new and return customers (we call them besties), we have been fortunate enough to expand our team and provide so many different jobs for people of all different walks of life,” he says.

Riley takes pride in the fact that the restaurants sustain people from everywhere. “The diversity of our team really makes me proud,” he says. “We have people from support roles to upper management roles from all over the world, and with us, they are able to sustain a lifestyle for themselves and their families.”

The Salt +Smoke restaurants are located on Delmar Blvd. in the Loop, Hampton Ave., Euclid Ave. in the Central West End, S. Main Street in St. Charles and they plan to open a new location this summer in Ballpark Village. Visit saltandsmokestl.com for additional dining details.