After loving a home from afar since high school, this homeowner transformed the space with help of designer Teddy Karl from The Great Cover-Up. 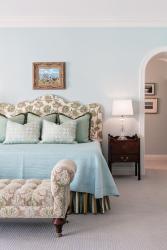 After falling in love with the printed silk drapery fabric, the homeowner chose complementary fabrics in light blue and green tones to pull together the design. 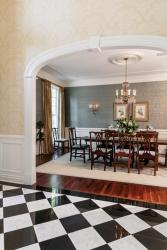 A rich, warm color palette in the dining room enhances candlelit dinners, while the silk blue wallpaper with gold accents add a hint of drama. 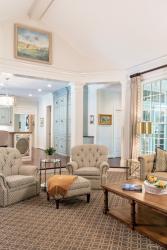 Designed for family time and comfort, the family room plays with patterns and neutral colors, such as the large, leopard print fabric pillows that contrast with the linen couch. 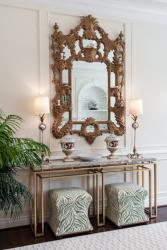 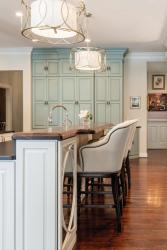 With two teenagers, the homeowner knew she wanted her pool house to be comfortable and functional, so she opted for Tina Turk water-resistant fabric for her chairs and pillows. The pool gates were made by Custom Metalcraft. Teddy helped the homeowner’s dream of a double-sided sofa come true. The pop of salmon pink makes a statement in the more traditional-style setting.

When she learned the tile she chose didn’t have a strong army green accent as she’d intended, the homeowner decided to incorporate the warm green paint on the walls.

These Ladue homeowners were ready for more than just a refreshing change in their home decor, and when the wife's realtor reached out to the previous owners of her dream home to make an offer, she knew it would be the home for her. “I had a friend who lived in the same neighborhood in high school, and I’d always drive by the house and admire it,” she explains.

Though she enjoyed recreating this dream home for her family, the process didn’t come without its challenges. After working with a designer who wasn’t meeting her needs, the wife connected instead with interior designer Teddy Karl of The Great Cover-Up. Immediately, she knew he was going to be the perfect design partner. “Teddy just listens so well,” she says. “Even if he thinks something else would look better, he’ll go with what the homeowner wants as long as they aren’t making a mistake.”

She and the previous designer had a disagreement about the centerpiece for her living room. The centerpiece is a double-sided salmon pink sofa that the homeowner had dreamed of having since she’d seen the original design in a catalogue years before. The double-sided couch allows for two distinct seating areas in the same room that creates a flow of conversations and guests.

“It was clear that this was a space for guests, and it was discussed as an entertaining space rather than a family space. We decorated it with an eternal cocktail party in mind,” explains Teddy. When he came onto the design team, he helped her pick the color of this custom sofa, and its salmon hue definitely makes a statement in the more traditional-style setting, especially when it’s hit by the light that streams off the pool deck and in through the windows. The homeowner added hand-me-down trinkets and decor from her mother to the beautiful existing clam-shell-patterned built-ins to combine the traditional look in the living room with her own fresh, funny style.

The kitchen was an equally important room for the homeowner to have remodeled to her specifications. Designers at Karr Bick Kitchen & Bath turned a 1980s kitchen with soffits and a segmented island into a colorful, functional space. They expanded the butler’s pantry by taking space from the laundry room.

The homeowner found a color similar to Sherwin Williams French Blue, and she worked with Mauser Cabinetry to add a black glaze over it, which made the paint perfect for her kitchen and complemented the other white cabinets. The homeowner fell in love with mahogany wood countertops found at Karr Bick Kitchen & Bath, and paired with black suede granite, the counters had style and functionality. The previous cabinets in the butler’s pantry, which were in great condition, were repainted to the homeowner’s liking.

The family room off the side of the kitchen was designed for family time and comfort. Though the homeowner thought she’d made a mistake on her carpet choice, Teddy saved the design with his impeccable fabric choices that lend a calm, comfortable and yet still sophisticated vibe. Teddy and the homeowner played with patterns and added large, neutral color leopard print fabric pillows to contrast with the linen couch.

When it came to her dining room, the homeowner knew she wanted a richer, warmer color palette to enhance the dim candlelight she envisioned using at dinners. Teddy and the homeowner chose a blue silk wallpaper with gold accents that matched the seat covers and didn’t overwhelm the dark furniture. “We used the wallpaper as a starting point for the design of this room,” says Teddy. “She wanted the room to feel special, and that wallpaper made it.”

A similar fabric story takes place in the master bedroom. Once Teddy showed the homeowner an option for the drapes, the rest of the room’s design fell into place. The drapes and the headboard are made with printed silk with light blue and green tones, and the satin-stripe dust ruffle plays with the light in the room.

The renovation for the master bathroom was already underway when Teddy joined the design team, but he still helped the homeowner pick fabulous fabrics and light fixtures to bring the room together. They’d already taken 6 feet out of the bathroom to lend to the laundry room, which was a priority on the homeowner’s remodeling list.

“I designed the tile pattern that goes around the bathroom floor and up the wall behind the bathtub,” the homeowner explains. When she originally picked out colors for the tile, she thought she’d be getting the accent of a very rich army green. However, when the tile was delivered, she panicked to see that the color was actually much closer to gray. That influenced their decision to incorporate warm green paint on the walls and the same color in the window treatments.

Beautiful plumbing fixtures bought through Immerse stand out next to the green ottoman from her living room. The crystal chandelier lights the bathroom with a sense of style, while glass beads from the sheer fabric drapes catch natural light. When they feel like they want more privacy in their master bath, they can draw their Hunter Douglas Silhouette shades with a privacy liner down to block out unwanted eyes.

After two years of waiting for the remodel to wrap up, the young family moved into their new home. However, their work wasn’t finished. They still wanted to revamp the old pool house. The building had environmental problems, so they gutted it to allow for an open-concept with a bright and fun design. Bumping the pool house out toward the pool added the extra space they wanted, and the retractable doors make for an easy flow from place to place.

With two teengers at home, they opted for colorful, water-resistant pillows made of Trina Turk fabric suggested by Teddy. “I didn’t want to feel uptight about teenagers damaging expensive fabric in the pool house, so the usability of the Trina Turk fabric made it perfect for our family,” the homeowner says. Two additional years of remodeling took place on this pool house, and the homeowners were able to start enjoying every aspect of their dream home.

Teddy says that he plans on sticking around and helping with any further updates the family may need: “We’ll always keep refreshing things. We’ve become friends. I just think there will always be another pillow to be reupholstered.”

“It’s a house I’ve always admired for a great period of my life, and to now own it and see the changes that we’ve made makes me happy and grateful,” the homeowner comments. “We’re ready to enjoy our time here!”