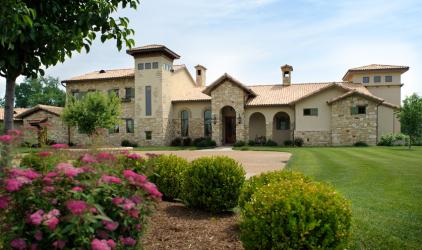 Long before the Roman Empire, the central portion of Italy was occupied by the Etruscans, an ancient but remarkably sophisticated civilization. Known today as Tuscany, this stunningly beautiful region has retained its unique character for centuries and continues to delight tourists with its sun-drenched hillsides, quaint villages, vineyards and fields of lavender and sunflowers.

Early Etruscans built their structures with whatever materials were locally available—predominately wood and, later, incorporating limestone and shale. Although subsequently influenced by Roman and Medieval design, the rural architecture of Tuscany remained consistently simple—balanced and sturdy, with clean lines, natural materials, earthen colors and an informal, rustic ambience.

During the Renaissance, Venetian architect Andrea Palladio designed some of the first Italian villas, incorporating various classical motifs into residential architecture, and by the mid-19th century, the romantic “Italian villa look” had taken Victorian England by storm. Quickly making its way to America, this idealized form was labeled “Italianate” and became the preferred home design until the 1870s, capturing the imagination of some of St. Louis’s most famous business tycoons, several of whose mansions are still standing.

Exteriors are usually clad with stucco and natural stone or brick, sometimes with a rosy hue reminiscent of the reddish limestone common to Tuscany. Even more villa-like, the entry may be surrounded by a courtyard with stone walls and perhaps a wrought-iron gate.  Harking back to the Etruscans, natural wood (weathered, distressed or carved, but never painted) continues to be the authentic material for entry doors, shutters, interior beams and furnishings. Other traditional accents might include classical moldings, brackets and cornices, cast-iron hardware and railings, window boxes and copper gutters.

Century after century, Tuscan design has never lost its focus. More than simply an architectural genre or style of decorating, it’s a way of life—la bella vita—warm and welcoming, superbly comfortable, family-oriented and evocative of one of the most picturesque and idyllic places on earth.