A 50-year love affair with a creek-crossed Kirkwood landscape 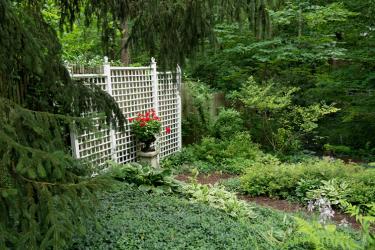 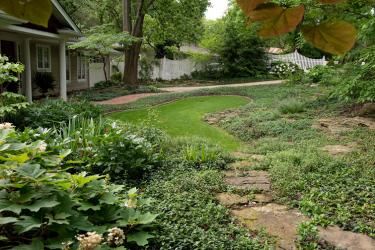 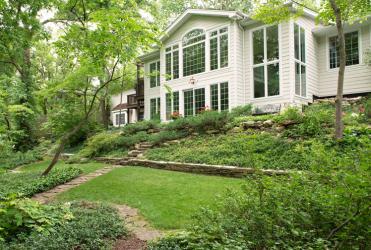 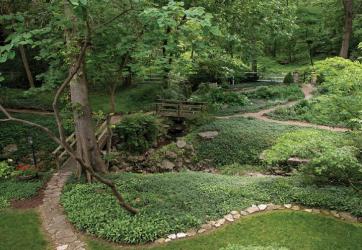 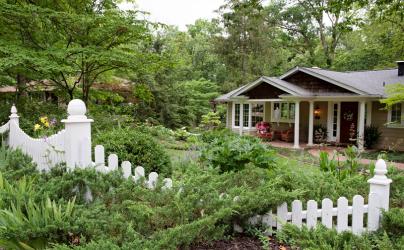 It was over 50 years ago when Judy Ward stepped through the front door of a 1950s bungalow on Friar Lane in southwest Kirkwood. She still vividly remembers walking past the kitchen at the front of the house, drawn immediately to a treetop vista of a one-acre, creek-crossed valley framed by a picture window at the back of the home. “I loved the view from the minute I saw it,” she recalls. While others might have been put off by the heavily wooded lot that sloped down from the street above to the origins of upper Sugar Creek below, Judy was entranced. The fact that the lot backed up to several other large, forested properties only increased her enchantment.

“The property drew me from day one. I’ve always loved the outdoors,” she says, “and always appreciated gardens. Not so much display gardens as looking at vistas. I started out to go into architecture, but if I were to plan my career over again, I would like to be a civil engineer working with building sites and views.”

As a young mother working from home for a Georgia-based manufacturing company, she began every morning looking out into the woods as she sipped her coffee. In those days, the property was a wilderness. “The yard was very overgrown. Some of the features like stone walls and pathways (put in by a previous owner in the 1950s) weren’t even visible until I began clearing the land,” Judy explains.

“There wasn’t a lot of gardening going on,” she adds with a laugh. “I was a young mother with two kids and not a lot of resources. At first, I just cleaned up the yard. “

But gradually, the planting began with the help of neighbors and friends.  “Alice Soliday lived behind me. She was quite a bit older, but we became good friends. She taught me the importance of augmenting the soil and she gave me some of my first plants, like hellebores (also known as Lenten roses), which are blooming now. They self-sow and are all over my yard.”

Judy can’t remember quite how it happened, but she also had the great fortune of becoming a friend of another Kirkwood resident, famed naturalist and conservationist Edgar Denison, who wrote the handbook Missouri Wildflowers, published by the Missouri Department of Conservation and now in its 6th printing. Denison was a huge proponent of using native plants in cultivated landscapes.

“I would be visiting him in his garden and say, ‘What is this?’ when I saw a plant I wasn’t familiar with. He would say, ‘Oh, you don’t have any of that?’ and grab a shovel to dig some up for me.”

“Edgar was always big on native plants, and in the spring my garden shines with big drifts of yellow celandine poppies, Virginia bluebells and daffodils. He gave me the start of many of the plants that are still naturalizing in my garden.”

Another neighbor, Bill Meyers, invited Judy to salvage the plants from his mother’s garden at the old Meramec train station.

The white-flowering native dogwoods that now float ethereally each spring outside the recently added, floor-to-ceiling windows at the back of her home began as “coffee can” seedlings purchased in the 1970s from Sunset Plantland, then on south Lindbergh.

There were times as a working mother of young children “the garden was a place of refuge” when she needed a bit of time to herself, even if that meant getting up at five in the morning to do what was needed in the garden before her workday began.

Through the years, providing those plants with a happy home has often been a challenge. The sloping topography of her lot and the convergence of two creeks makes erosion a continual problem. “It is a job keeping the creek bed in place. I’ve had to terrace almost the whole thing,” she says, recounting the boulders and bobcats required to shore up the back yard through the years.  Swollen, rushing creek waters due to heavy rains twice have required her to replace the bridge over the main creek.

Another challenge in the past 15 years has been the deer that found their way into Kirkwood and Judy’s garden. Gone are the deer-delectable daylilies she loved. Peonies, which the deer leave alone, now replace them. Included in her collection are the old fashion herbaceous peonies, more shrub-like tree peonies and the recently hybridized Itoh peonies that are a cross between the two. “I’ve become an expert on what deer don’t like, including anything minty or with pubescent (fuzzy) leaves.”

When she retired 10 years ago, Judy’s love of gardening took her directly to nearby St. Louis Community College at Meramec where she began taking horticultural classes and now has over 20 hours of credit.

Other than moving boulders and heavy terracing, Judy does the work in her garden herself, some days working as many as four to six hours and other times letting the garden take care of itself. “I will try just about anything in terms of plants,” she says. “If it is happy and does well, I go with it,” but she is not inclined to baby plants that struggle. She also loves the “random wildness” plants that self-sow contribute to her garden.

When it comes to extra care, she makes an exception for tall, evergreen Canadian hemlocks for the graceful presence they add to her landscape. “You have to fertilize them every year with an evergreen fertilizer. If we have a dry summer, you have to put a lot of effort into watering them, but there is nothing more beautiful than hemlocks with snow on them.”

Judy remains as passionate about her property today as the first day she day she walked through the front door and took in the vista at the rear.

“Everywhere I look, there is history, a connection with a special friend or a special trip or special times. This little woodland valley has been a piece of heaven for me and for my family for over 50 years,” she affirms.