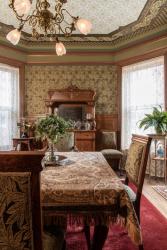 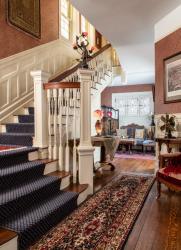 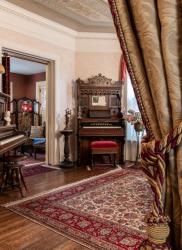 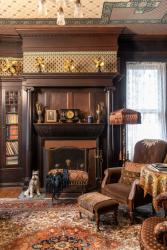 It’s an understatement to say Gerry Fisher has a fascination with antique fans. He currently owns 63, all of which function. They are artfully spread throughout his Central West End home. “It’s a crazy thing to be interested in,” he admits. “But when you think about that, what is the one thing that was better in 1910 than it is today. The fans built then were infinitely better than fans are today.”

Fisher’s passion for antiques goes far beyond fans. He meticulously decorated the entire home—which was built in 1892—in a late 19th century style.  “I still root around the antique stores a lot,” he says. “You never know what may turn up.”  If he finds an item he likes, he’ll evict something to make way for the newly acquired. Or he’ll share the find with others, like his daughter.

Fisher has a hard time naming one non-fan antique item as his favorite, but he loves a pump organ and an Eastlake entry hall table. The organ is a favorite because he says it “is a curious blend of traditional Victorian curviness and Eastlake incised carving. Made by the Cornish Company, it is a 100 percent unrestored original and works perfectly.”

He describes the Eastlake entry hall table as a riot of Eastlake design elements that appeared in the late 19th century. “This design school moved away from the curves and high-relief ornamentation of Victorian furniture and went to geometric shapes and incised carvings,” he says.

Each of the home’s rooms has a colorful oriental rug. Up above, the ceilings display the rich colors of the time period. Wallpaper patterns and colors were selected from Bradbury & Bradbury pattern books, which are now available online. A local paperhanger installed the paper.

He enjoys finding and buying antiques that are in bad shape and doing what’s needed to make them beautiful and functional again. For the fans, that often includes rewiring and repairing, plus re-lacquering brass. “I watch the ballgame and work on them,” he says.

When searching for antiques, he goes to some auctions and estate sales, but also frequents antique stores here in St. Louis and in other cities whenever he travels. He doesn’t buy online because he prefers to see items in person when shopping.

He says that acquiring antiques is a nice pasttime for anyone who likes to scrounge around, but patience is a must. “The main thing if you’re collecting to decorate is understand that it’s something you can’t do overnight,” he says. “If you’re going to do it properly, don’t be in a hurry.”