From quaint cottages to imposing country manors,Tudor styling has endured for centuries. 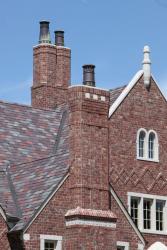 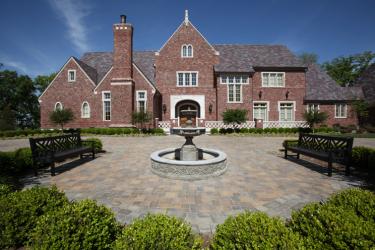 One of history’s most distinctive architectural styles, Tudor homes have been in and out of fashion since the early 1500s. The design made its initial appearance in England during the reign of the Tudors (1485–1603) and represented a significant departure from the ornate, vaulted, stone-heavy castles and cathedrals of the late Medieval/Gothic period.

Over the centuries, Tudor styling has evolved, incorporating various influences, materials and elements from other countries and time periods. Generally speaking, however, traditional Tudor exteriors tended to be asymmetrical with masonry on the lower level, half-timbering and stucco or plaster on the upper floors, resulting in the characteristic black (or brown) and white color scheme, steep-pitched roofs with multiple gables, tall mullioned and dormer windows, embellished entryways and several chimneys, sometimes with chimney pots. Steep roofs and exposed timbers prevented water damage, making the design resilient against England’s cold, damp climate.

Constructed with sturdy, “noble” materials, many of the huge country manors built by the aristocracy hundreds of years ago are still standing today. Timber framing made Tudor homes affordable to commoners as well, and the style endures in the villages and quaint cottages dotting the English countryside.

Fast forward to the late 1800s, when large numbers of European immigrants began arriving in the United States.  Industry was booming, and the nostalgia and old-world charm of Tudor architecture became increasingly popular. Now termed Tudor Revival, the design was particularly well-suited to the colder climates of New England and the northern states and lasted into the early decades of the 20th century.

Tudor homes were expensive to build and became something of a status symbol for prosperous families moving to the peace and quiet of the “country,” particularly during the 1920s. Here in the St. Louis area, classic examples from this era can be found in affluent suburbs like Webster Groves, University City, and Kirkwood.

In today’s market, Tudor Revival has taken on several more modern forms (e.g., French Country and Craftsman), and the boldly contrasting exterior design has given way to softer, more natural hues. But for those who love the authentic Tudor look, a custom home built with state-of-the-art materials can certainly reproduce the romantic charm of this iconic architectural style.