A local landscaper brings his work home with him to his beautiful conifer garden. 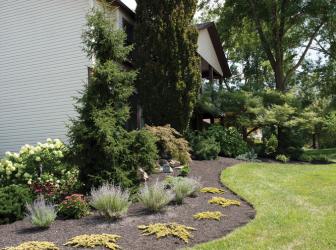 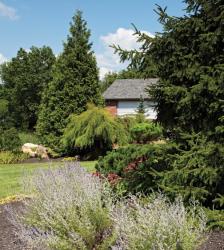 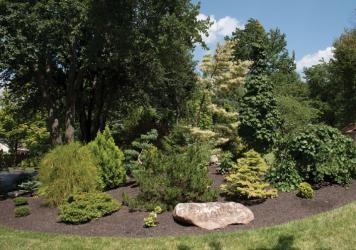 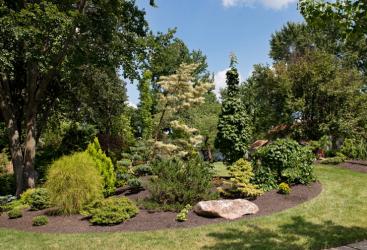 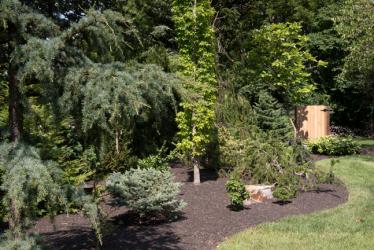 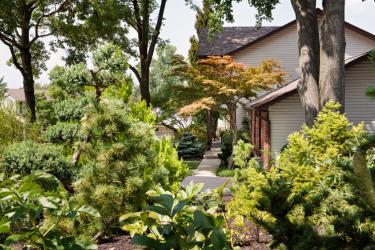 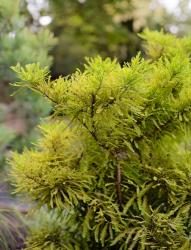 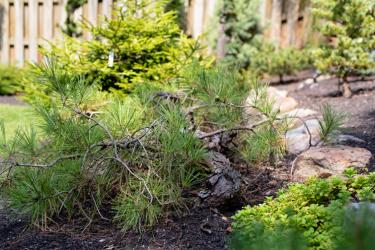 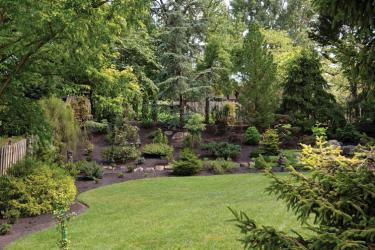 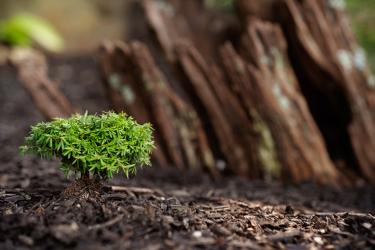 Mike Curran is a self-proclaimed cone head; not the bald-pated kind that descended from outer space to voraciously eat and drink their way through reams of Saturday Night Live sketches.

Mike’s cones are the earthly variety that come with roots, trunks, branches and needles or scales. His fascination with the shrubs and trees most of us refer to as evergreens has led him to become one of the go-to experts on conifers in this part of the country and the owner of Timberwinds Nursery in Ellisville.

A visit to Mike’s own hillside conifer garden at his Chesterfield home brings close encounters with stick-like conifers that march and stand guard, short fat conifers that nest on the slope and conifers so flat they seem to ooze from the ground. There are conifers that sway in the breeze and some with branches reaching out like arms as though they could offer a handshake. There are even pendulous, flopping conifers that look as if they could break into song like the animated trees in a Disney movie, and conifers clipped to snake up a wall, branch by branch.

All in all, there are over 300 conifers covering the just over half-acre lot. “The more weird, funky or unusual it is, the more I like it,” says Mike with a laugh. “Conifers have unique shapes, textures and colors.”

His love of conifers goes back almost to the beginning of his interest in horticulture. “I’ve always liked plants,” he explains. While working for Kroger’s in the early 1980s, he used his spare time to work for landscaping companies and went on to take horticultural classes at Meramec Community College at night. Eventually, he began his own landscape contracting company and soon was working as a subcontractor for the old Timbercreek Nursery, doing most of their installations.

In the late 1980s a friend who worked at a different nursery gave him his first conifer, a pendulous, drooping weeping Norway spruce, an evergreen that appears as if it could become animated at any minute, and Mike was hooked. That passion was enhanced when he began going on buying trips to Oregon with Timbercreek owner Robert Specker. “He was the one who started me going to Oregon and finding all the neat stuff.” Mike says. “He knew I was interested and let me tag along.”

In 2000 Mike closed his landscaping business and began working as a sales associate at Timbercreek. At the same time, he and his wife moved into their current home, bringing 37 of Mike’s favorite conifers with them. When SummerWinds bought Timbercreek in 2002, Mike became assistant manager and then manager of the nursery. In 2017, he purchased the nursery from SummerWinds and combined both names to become Timberwinds. By that time, he had also increased his personal conifer collection 10-fold and his garden was fast becoming a must-see stop for conifer lovers from in St. Louis and well beyond.

He credits his years of going to Oregon with Bob Specker as making his transition from Timbercreek to SummerWinds to Timberwinds possible. “He showed me the ropes,” Mike says. “He introduced me to everyone. I knew why he bought this plant from this nursery and what they specialized in. I knew all the connections and didn’t have to find out for myself.”

Now when he heads to Oregon, in addition to buying for the nursery, he arrives with a file of 30 to 40 conifer-loving customers not only from St. Louis but from Chicago, Kansas City and parts of Indiana who are looking for the unusual, funky conifers that Mike discovers on his trips. “I basically visit 20 to 30 nurseries,” he says. “We start at 7 in the morning and we go until 7 at night.”

His customer base is continually growing. He recently played host to a busload of Master Gardeners from the Bloomington-Normal area of Illinois. They spent over an hour clambering up and down the hillside asking questions about everything from the bleached-out needles of a variegated pine to the flattened, single-plane branches of a Blue Atlas cedar that he is training to climb up the brick walls of his garage in the same way Europeans have for centuries espaliered apple and pear trees.

One of the things that Mike likes to point out is that even though they are commonly called evergreens, conifers come in a variety of colors that provide year-round garden interest. For instance, the scale-like foliage of low growing "Motherload" junipers, ringing the front of his home, shines golden yellow in the spring and summer but turns pinkish purple during winter.

Mike has been joined in his business by son Mike Curran Jr., who is rapidly becoming as knowledgeable as his father when it comes to plants. In selecting conifers for a home garden, no matter how interesting the plant’s shape, there are other things to think of first, he says. “Sun exposure is important. Some conifers need all-day sun while others do well in a mixture of sun and shade. It is also important to look at mature height and size, so the tree or shrub won’t outgrow its space.”

Another consideration is how much maintenance a particular conifer needs and what a person’s lifestyle is,” he adds. “A good question to ask is, 'Is what I am buying something that I need to maintain weekly or can I go on vacation for three months and not have to worry about it?’ We don’t want people to enjoy something for six months and then it dies. We don’t want to set them up for failure.”

Drainage is all important when it comes to planting any conifer, Mike Senior advises. “With our clay soil that can often be an issue.” If there is any doubt, the soil where the conifer is going to be planted should be amended with organic matter so moisture from heavy rains can drain away and the roots of the plant are not continually sitting in water.