Step across the threshold of Maria and Ken Bowers’ South County home, and you are drawn into the mural that stretches across the entire back wall of their residence. 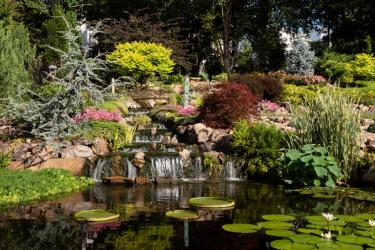 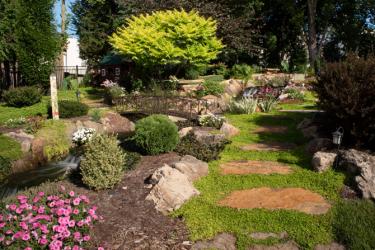 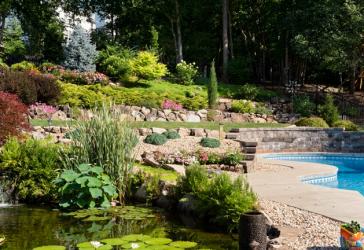 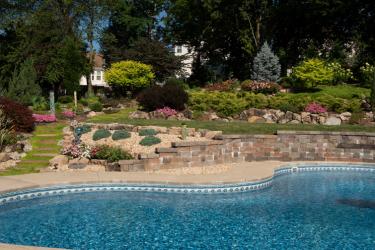 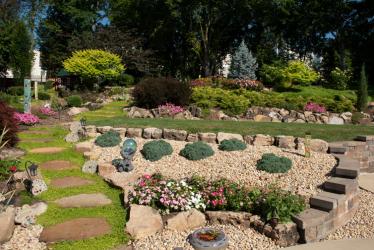 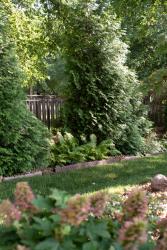 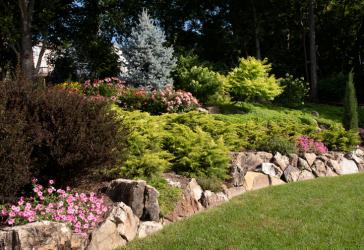 From floor to ceiling, it features a hillside landscape painted with glowing yellows and greens and pops of bright color. A bubbling waterfall cascades down the left side of the picture and spills into a water lily-filled koi pond. It is balanced by a shimmering, blue swimming pool to the right. At the base of the image, stone pathways lead up the hill, drawing the viewer even further into the landscape. At the top, a shady retreat offers a place to sit and view everything below.

That mural is everything Ken and Maria hoped for when they designed their home five years ago. Avid gardeners for many years, they knew they needed to downsize from the one-acre plot they had previously tended. In the selection of a place to move, they carefully vetted the location, selecting a hillside lot that stretched upward so that view of their garden would fill every window of their new home.  “The whole back of our home is windows,” says Ken, “so no matter where we are, we can see the garden. We had to argue with the builder who wanted to put the fireplace along the back of the house. We made him find another place for it.”

While Maria and Ken felt totally comfortable with their gardening skills and being able to paint a picture with plants, they needed someone to stretch the canvas so their work could begin. To do that they called on Caleb, Josh and David Bauer of Bauer Falls. Ken and Maria had a long association with “the boys,” as they call them. “I think we were their very first customers at our old house when they formed their own company,” recalls Ken. That association had been so successful, they knew immediately who they wanted to design the natural looking water features at their new home.

While the topography was correct for what the Bowers wanted, it was a long way from being ready to plant. “They pointed to where they were going to build their house and told us to use our imagination to create a little oasis,” Caleb recalls.

The project required both imagination and an excavator. “The place was a jungle,” Caleb continues. “The hillside was covered in bush honeysuckle and vine honeysuckle. Josh was on the excavator and created this giant ball of honeysuckle vine that filled our trailer.”

Two weather-dependent months and 17 palettes of stone later, the bones of the garden had formed. A 100-foot stream bed spilled down the terraced hillside and into a pond, pathways and soil led up and around the water feature and there was a spot for a swimming pool.  The Bowers had the balance they wanted between pond, pool and garden.

With the canvas ready, Maria and Ken began their artistry. Loving the contrast between yellow green and blue green foliage, they selected yellow Tiger Eyes sumac, Blue Atlas cedar, blue spruce and spreading Saybrook Gold juniper. They added the purple foliage of Forest Pansy redbud. Green Giant arborvitae provided screening along the sides of the property. Nandina went in for year-round interest provided by lacy foliage, white, lilac-like blossoms in early summer and red berries in winter. Different types of hydrangeas with a variety of bloom times added to the mix. Crepe myrtle was there for summer color. Tiny mazus reptans covered the ground around stepping stones and glowed with chartreuse foliage and tiny purple flowers.

For help with larger selections and major planting, they called on longtime friend David Haring of Sundown Landscape Contracting. The hostas, ferns and other perennials, they planted themselves.

While there are some annuals in their garden for continual color, the Bowers are strong believers in perennials because of the constant change they bring to the landscape from the dogwoods and creeping phlox in the spring to burgundy foliage of the oakleaf hydrangeas in the fall. “It is always interesting to walk around the garden,” says Maria. “It is different this week than it was last week.”

Making the garden a true oasis is the continual sound of the water that cascades down the hillside. “We are near Gravois Bluffs,” explains Ken, “but when we are out in the yard, we never hear the sound of traffic.”

The Bowers love of gardening goes back for more than 35 years when Maria first joined the Southwoods Garden Club. “I got a lot of books and started reading about different trees and shrubs,” she recalls. “Ken got interested because I was interested.”  “Both of my grandparents were farmers and I grew up on a farm until I was in seventh grade,” Ken adds.

Through the years, the Bowers have added to their knowledge and focused on the plants they love, employing that list of favorites to create their new garden. “We also ran away from some things,” notes Ken, adding that they had a long list of invasive species that they were determined not to plant in their new space. In this garden they have also used more rock mulch, which Ken finds longer lasting and easier to deal with than organic mulch.

The Bowers have an ongoing relationship with “the boys” of Bauer Falls involving maintenance and small projects. It is nourished by their names pronounced the same although spelled differently. “The coolest thing about the Bowers is every time we come back, it is prettier than when we were there before,” says Caleb. “They always put on coffee and pull out snacks. They are almost like parent figures to us.

“We are working right alongside them. They are such good and devoted gardeners; you can tell they get real joy out of it. For us, being there is like a dream, no matter what time of year we are there, being in their landscape is like being in another world. You totally forget where you are.”

To maintain their plant-life painting, the Bowers estimate that they each spend two hours a day in the garden. “The hard work amounts to less than an hour; the rest is just piddling,” Ken says with a laugh.

There is joy, they both agree, in simply being outside surrounded by beauty. “We like to be outside as much as possible,” adds Maria. “We love to read and learn about different plants. It is always interesting just to walk around the yard. There is a calmness and relaxation you get out of it.”