The Barcelona chair stands the test of time. 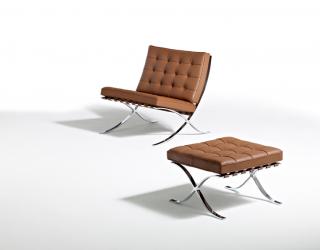 When Ludwig Mies van der Rohe was commissioned to represent Germany in the 1929 International Exposition in Barcelona, Spain, he knew he had to create something magnificent. Regarded as one of the pioneers for modernist furniture design, Mies wanted to display his skills while premiering the progressive design culture of his native Germany. With this in mind, Mies created the Barcelona Chair, one of the most iconic pieces of furniture of the 20th century.

Mies began with the vision of creating not just a chair, but an “important chair…a very elegant chair.” Knowing that the King and Queen of Spain were going to be in the exposition’s attendance propelled Mies to design a chair that would be fit for a king. To create this “elegant chair,” Mies began his design with a unique positioning of the chair’s legs to create a highly cantilevered seat. The distinctive design of this seat was framed by two chrome-plated curved front legs and two s-shaped back legs to create a truly unique piece for its time. Mies designed a chair with the perfect balance of form and function.

Although only two chairs were made for the exposition, Mies’s chair became so popular that it was put into production right away. Several manufacturers have produced the chair, but the honor now belongs to Knoll, which has built the chair since 1947. Small updates were made over the years as the seat is no longer crafted using pig-skin leather but rather with sumptuous cowhide leather. The chair now comes in several different options of luxurious leather in a bevy of colors. Even though minor adjustments were made, Mies’s original vision remains to this day.

The Barcelona Chair is for someone who appreciates fine craftsmanship and unparalleled style. A chair as sleek as this will fit right in with any modern design style. Pair this seat with the complete line of Barcelona furniture, such as the Barcelona Ottoman, or let the exquisite beauty of the chair speak for itself.