Osage, Can You See?

If the constraints of being supplied by an urban garden are prohibitive, it doesn’t show in the menu at Cafe Osage. Strategic planting and smart use of available produce make for a menu that’s purposeful and evolving. 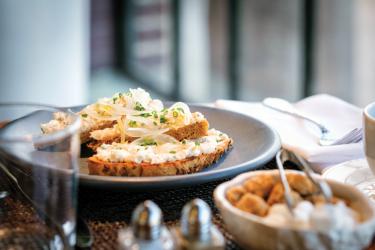 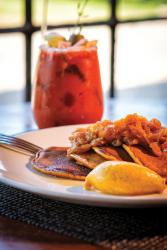 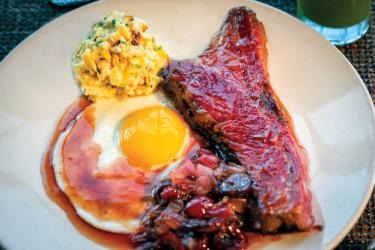 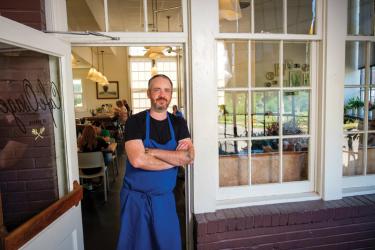 Being neighbors with a nursery is handy for a chef. On any given day, Chef Scott Davis of Cafe Osage is whipping up breakfast and lunch laden with vegetables and herbs from Bowood Farms’ rooftop nursery, hoop house and large garden next door. It’s forced the Vancouver native to plan well ahead for planting and harvesting what he’ll need — and not wasting what’s in ample supply.

“It’s taken some getting used to,” says Scott. “You get used to ordering stuff at will, but our process is a little bit stretched out — planning a season ahead and waiting until it’s ready. We decide what we want to grow and how we want to use it on the menu. It’s a small space, so you try to get as much out of it as is logistically possible.”

Scott’s menu is vegetable-dominant, certainly more so than the typical breakfast, brunch and lunch fare. It’s challenged him to stretch his creativity when the garden gives him a little or far too much of what he wants. Take eggplant, for example. “Eggplant is something I’ve used in dinner but not a lot in breakfast,” he says. “When you get eggplant, it’s a lot of eggplant. [But] it’s great for pickling and making into sauce.” The chickpea toast sprung from the abundance of eggplant (pureed), onions, tomatoes and chickpeas that all matured at the same time. “Almost an entire section of the garden is dedicated to it.”

Scott has some wiggle room for experimentation despite using an urban garden. Produce in its “baby stage” packs a lot of flavor and nutrients. Recently, he requested the planting of celtuce — also called stem lettuce or celery lettuce. Popular in Asian nations but not as well-known in the States, celtuce is a crispy stalk vegetable with a mild flavor similar to asparagus. The young chef enjoys the veggie in raw form, but his boozy celtuce sorbet has a “cool, refreshing, vegetal and almost margarita feel to it,” he says.

While major menu changes naturally occur with the seasons, the maturation of different items from the garden necessitate a different special practically daily. A few items — such as the whitefish salad with rye, Moroccan grilled chicken, and Osage burger — are perennial favorites. But what’s the challenge is remaining static?

“To me, the evolution of the menu is what’s especially fun,” says Scott, “the evolution of the garden and figuring out how to work with it.” Cafe Osage is open for breakfast and lunch seven days a week. The café also hosts bi-monthly pop-up dinners. Keep an eye on the restaurant’s Facebook or Instagram pages for upcoming dates.