The Eileen Gray side table proves that sleek and simple never go out of style. 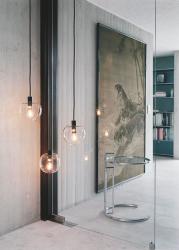 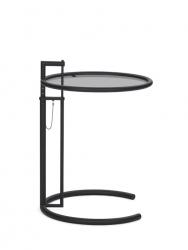 Throughout Eileen Gray’s career as a furniture designer and architect, she supported revolutionary theories of design and construction. This avant-garde mindset led to her becoming a fixture of the Modern Movement during the 1920s and 1930s, and it was during this era that she designed the E-1027 Adjustable Table, also known as the Eileen Gray side table. Between 1926 and1929, Gray was building a villa in the Roquebrune-Cap-Martin commune of France with the help of French architect Jean Badovici. This house was the first of Gray’s creations to be known as E-1027; it provided both the name and the inspiration for the soon-to-be table. The name itself is a code of Eileen Gray and Jean Badovici’s names: E stands for Eileen, 10 and 2 stand for J and B — the tenth and second letters of the alphabet — and 7 stands for G. While furnishing the house, Gray decided that she wanted a table which could be used over her knees while sitting or as a bedside table. Thus, in 1927, she conceptualized and crafted the E-1027 Adjustable Table.

The appeal of the E-1027 is twofold. First, it is multi-functional because the circular tabletop can be lowered or raised to heights between 22 and 36 inches off the ground. Its second draw is its sleek, modern design. The base of the E-1027 is a polished, chromium-plated tubular steel, and you can choose from three finishes for the tabletop: clear or tinted polished plate glass or a satin black metal. Altogether, the lightweight and utile table is a modernist icon. Its ingenuity has even been recognized by the Museum of Modern Art in New York; since 1977, the museum has featured the E-1027 in its permanent design collection. Gray’s innovative vision for interior design is enduring because, decades later, her creations are still considered stylish and desirable.