"Neo-Glam" It's all in the Details

Designer Gigi Lombrano proves that a luxury home can be both elegant and dazzling. 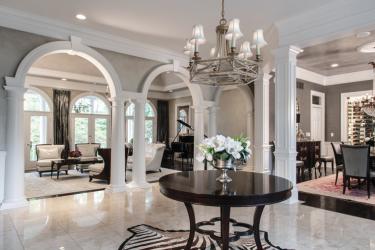 Open to the living and dining rooms, the entry foyer introduces several of the home’s consistent design motifs, including the high-luster, dark-toned furnishings, as illustrated by the Alexa Hampton table by Hickory Chair; the “X” pattern in the Fine Arts chandelier; and an eye-catching zebra rug. 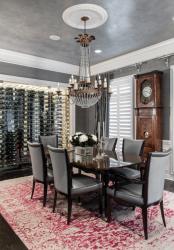 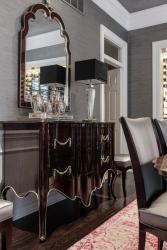 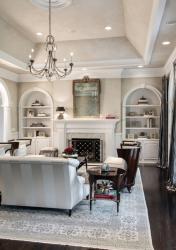 Cool and sophisticated, the living room features a Baker loveseat, sleek recamier chairs, and a fireplace surround faux-painted to resemble the foyer’s marble flooring [shown below left, with the hall leading to the powder room]. 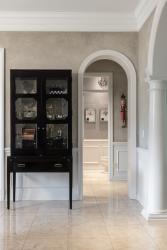 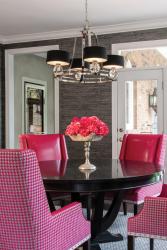 One of the owner’s favorite hues, fuchsia adds a vivid burst of color to the casual dining area. 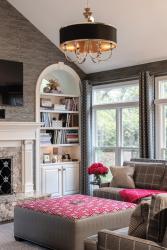 Upholstered in a Manuel Canovas windowpane fabric, the hearth room sofas are arranged around an oversize custom ottoman, recovered in a bold Romo pattern and faux leather. Granite was installed on the fireplace surround and complemented by wallpaper resembling grasscloth. 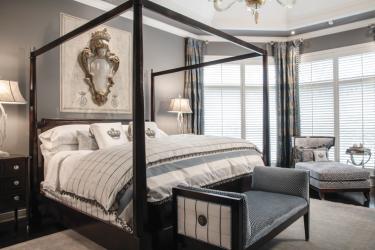 Accented with a dramatic cartouche from a church in Italy, the master suite’s canopy bed is sumptuously detailed in silk, beaded Houlès tassels, and Swarovski crystals. One of three distinctive guest suites on the lower level, the Tyrolean-styled bedroom displays framed antique needlework pieces above a loveseat upholstered in a crewel fabric with Stroheim bubble fringe. 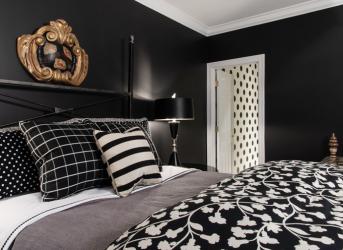 Pattern, texture, and metallics are emphasized in the third guest bedroom. The fuchsia-&-gray color scheme reappears in the floral duvet on the Universal bed, contrasted with a Manuel Canovas stripe on the footstools. Overhead, a crystal-beaded cage chandelier provides another glamorous touch.

During her three-decade career in the industry, award-winning designer Gigi Lombrano has assembled an impressive list of clients who wouldn’t dream of working with anyone else. These owners, first discovered her talents 20 years ago and, even when relocating to other cities, called on her to personalize their homes.

Returning to the St. Louis area in 2006, the couple purchased this traditionally styled, 8,000-square-foot residence in Frontenac, where they raised their twin sons. When the boys left home, Lombrano and the wife joined forces to create a new look for their empty-nester lifestyle. By this time, what had begun as a designer/client relationship had evolved into a close friendship. “Gigi is a great listener, and she knows me like the back of her hand,” says the wife. To which Lombrano responds, “We collaborate on everything; nothing intimidates her, and we never tire of each other.”

Last spring, with houseguests scheduled to arrive for the PGA Championship in August, the creative duo seized the opportunity to give the home another complete makeover. Describing her client as “very tailored and couture, but loving details,” Lombrano suggested a “neo-glam” aesthetic, stylish and sophisticated with a bit of “flash.”

The décor would focus on beautiful shapes and lines, intriguing textures and patterns, meticulous detailing and a dignified palette of gray, blue, silver and black. For “flash,” they decided on fuchsia, one of the owner’s favorite hues. The challenge for Lombrano was to incorporate this bold color choice — and other surprising elements — into each space so seamlessly that they would complement, rather than detract from, the elegant ambience.

With only five months to achieve their goal, the redesign was a major undertaking. “Friends and family are everything to us, and we entertain a lot,” the wife explains, “so I wanted the spaces to flow together.”  Starting at the front entrance, the exterior was accented with limestone, and a custom, dark mahogany entry door with a neo-classic X motif detailing that would be repeated elsewhere in the home.  Inside, the main-level oak flooring was stained and refinished to match the entry door.

Open to the foyer, the formal dining room is a perfect illustration of their collaborative ingenuity. An alcove on the back wall was eliminated and rebuilt as a full-wall refrigerated wine cooler with a 498-bottle capacity. The remaining walls were covered in metallic grasscloth, accentuating the high-gloss, dark-toned furnishings, which include the owners’ original dining table and chairs, reupholstered in a Kate Spade silk with striped velvet backs and metallic trim.

Positioned against a side wall are a gracefully curved Jonathan Charles bombe chest and mirror in black eucalyptus with lustrous hardware and trim. An antique silver tea set, Edwardian candlesticks and a mid-1800s clock from Paris add simple elegance, and the silk-and-wool rug hints at things to come with its deconstructed fuchsia pattern. Overhead, the rich gray ceiling introduces a surprising touch of glam, shimmering subtly with what homeowner refers to as “pixie dust.”

Transitioning from the foyer to the living room, the fireplace surround was faux painted to resemble the foyer’s marble flooring, and the decorative firescreen repeats the decorative X motif pattern of the entry door. Demonstrating her own artistic skill, the owner refinished each button on the firescreen by hand for a similar metallic finish. The living room ceiling soars to 18 feet, and to create a more intimate atmosphere for this expansive gathering space, the original two sofas were replaced with a Baker loveseat in a tone-on-tone Manuel Canovas satin stripe and four sleek, contemporary klismos chairs in textured silk.

The denouement arrives in the activity areas, where the cool, serene ambience is transformed by a vivid burst of fuchsia. In the casual dining area, a classic, dark-toned harbor pedestal table is surrounded by contemporary Vanguard wing chairs that blend fuchsia faux leather with an eye-catching fuchsia-and-gray houndstooth fabric.

Similarly dramatic, the adjacent hearth room was furnished with new sofas in a neutral Manuel Canovas windowpane fabric, arranged around an oversize, custom-built ottoman. Pre-owned and a longtime family “essential,” the ottoman was reupholstered for the third time in a fuchsia-and-gray Romo fabric with faux leather sides. Granite was installed on the fireplace surround and the firescreen has an X motif pattern; the wallpaper resembles grasscloth and the windows are lined with drapes in a simple polka dot design.

A soothing blue-gray was chosen for the exquisite main-floor master retreat, where the attention to detail literally becomes an art form. The clean-lined canopy bed is swathed in silk Beacon Hill bedding, trimmed with Houlès beaded tassels. Above the bed hangs a stunning cartouche from a church in Italy, and when this piece failed to adequately fill the space, Melodie Shocklee was engaged to paint a trompe l’oeil frame, cleverly ornamented with his/her crowns in Swarovski crystals.

Reupholstered in a lush Scalamandré fabric, the bench at the foot of the bed features beaded trim and Houlès rosettes. The theme is repeated in Clarence House drapes, accented with Houlès braid to which Lombrano added rosettes. Still more detailing is evident in the récamier chaise, covered in Osborne & Little cut velvet with a combination of Houlès braid and metallic fringe.

On the lower level, the fuchsia-and-gray color scheme makes its reappearance in the entertainment area, but each of the three guest suites has been given its own unique décor. The “black-and-white” bedroom showcases a Barbara Barry duvet and bedding, florals and polka dots and another cartouche, this one acquired in Memphis. A second bedroom has a Tyrolean theme with an FFDM bed and side tables, a crewelwork-covered loveseat, framed antique needlepoint and gold-finished Louis XVI chairs “rusticated” with potato sack burlap and upholstery tacks. The third bedroom emphasizes pattern, texture and metallics with a Universal bed, beaded crystal cage chandelier and a fuchsia-and-gray duvet contrasted with footstools in a Clarke & Clarke stripe.

The epitome of “neo-glam,” this extraordinary residence proves several things: handled skillfully, bold design choices can be both tasteful and spectacular. Meticulous detailing adds excitement — and a whole new dimension — to the décor of a luxury home. And, in a highly competitive field, Gigi Lombrano’s unique ability to interpret her clients’ lifestyle and vision is clearly the reason for her enduring success.