The luxe mountain town of St. Moritz was made for St. Louisans and for any Midwesterner with a fondness for fashion, food and off-season deals. 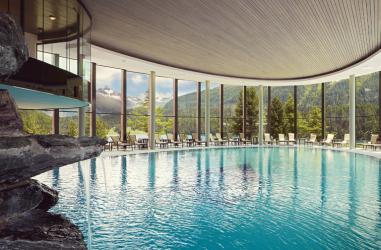 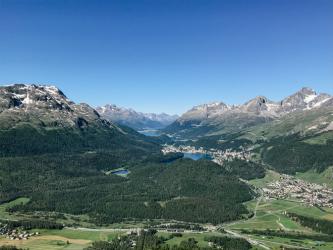 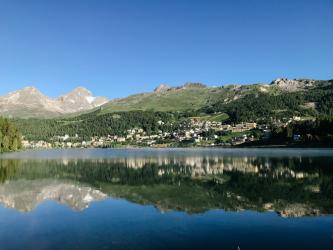 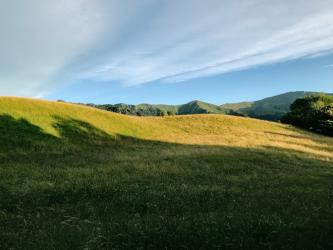 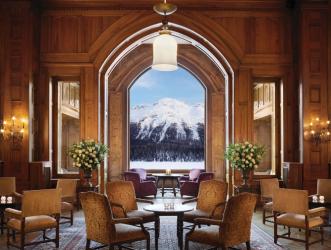 How do you measure time? For the watchmakers at Gübelin — the second jeweler to land in St. Moritz — there’s an easy answer dating back to the 1600s, involving a rotor, gears and the escapements tucked inside Swiss reformationist John Calvin’s austere timepieces.

But there are more interesting ways to track one’s minutes in St. Moritz, a chic resort town nestled in the Engadin valley. You might count, for example, the number of bites it takes to devour the local specialty, Capuns, at the Chesa Veglia, a former farmhouse serving traditional Swiss fare in a cozy, rustic environment.

An even better metronome is the number of sips in a glass of Pinot-Noir from the Maienfeld wine-growing region, best enjoyed in Le Grand Hall at Badrutt’s Palace Hotel, a five-star property with opulent architecture, breathtaking views and an unforgettable spa. (Make sure to ask the concierge for the backstory on the giant picture window that inspired Alfred Hitchcock's "The Birds.")

Rooms at Badrutt’s Palace Hotel go for $2,000 a night during ski season, when billionaires and celebrities roll into town. Summer rates, though, start in the mid-$300s, giving savvy guests access to top-notch service and amenities — grass tennis courts and Michelin star-rated chefs included — at a fraction of the cost.

It’s easy to get a feel for Switzerland’s dynamic topography by riding the Glacier Express into St. Moritz, the train’s terminus, where the high-altitude landscape looks exactly like what you’re expecting from the Heidi VHS box: snow-capped alpine peaks cradle sparkling lakes and meadows inhabited by roaming goats and cows with bells dangling from their fat necks.

Decadence is encouraged throughout Switzerland, so don’t be shy about indulging, whether that means shopping a slew of top luxury brands (Hermès, Gucci, Bottega Veneta, et cetera) lining St. Moritz’s cobblestone streets — or sampling handmade Swiss chocolate at Gianottis Pontresina — or joining the head sommelier at Badrutt’s Palace Hotel for a tour of their impressive cellar, containing over 30,000 bottles of vino.

Swiss wines aren’t particularly expensive, but they’re exclusive nonetheless because you can’t get them anywhere else in the world. Only 1.5 percent of wine produced in Switzerland is exported. It’s not snobbery, just basic economics: At 8 francs per kilogram of grapes, raw materials are pricey; add to that taxes and shipping fees, and it doesn’t make sense for the Swiss to sell their wine abroad. So it stays put — all the more reason to enjoy a few glasses.

But first check out the fairways at Golf Engadin St. Moritz, home to the St. Moritz Gold Cup (July 4 to 7), the St. Moritz U.S. Celebrity Golf Cup for Ryder Cup Trust (July 22 to 29) and the GolfersChoice Engadin Pro AM (August 25 to 27). A walk is nice, too, along the paved path bordering Lake St. Moritz, a popular destination for fishing, sailing, kitesurfing and stand-up paddle boarding.

You can’t go to Switzerland without seeing the Alps. For some seriously scenic views, climb 700 meters on the red funicular from Punt Muragl to the Muottas Muragl, where a moderate half-day hike on the aptly named Panoramic Trail takes tourists from Muottas Muragl to Alp Languard. Swiss hiking trails are dotted with charming huts, and a hearty lunch at the Paradis hut on Alp Languard is a must before hopping a chairlift back to Pontresina.

It’s tempting to bide all of your time in St. Moritz, but consider exploring other portions of the countryside, especially Zurich, the nation’s largest city, and the southern canton of Ticino with its palm-lined lakes and strong Italian influences. If you make it to Ticino, consider lodging at Hotel Eden Roc in Ascona, just a short walk from an enticing lakeside promenade and the Golf Patriziale Ascona.

Switzerland is pure magic. Through its centralized location, the tiny nation has absorbed the best parts of its surrounding countries – Italy, France, Germany, Austria, and Liechtenstein – becoming a mosaic of people, food and languages spread over 26 cantons (similar to states). Back in St. Moritz, in the eastern canton of Graubünden, there are hundreds – if not thousands – of unique ways to keep time. But when you’re visiting paradise, here’s the best way measure the moments: Notice how often time stops completely as you pause to marvel at the elegant wonders that abound.