Things are Looking Up 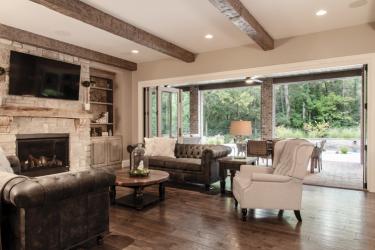 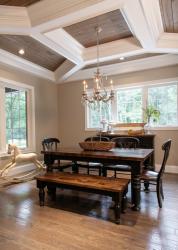 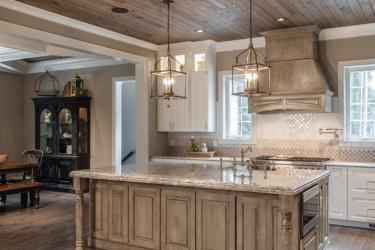 Homeowners Amy and Todd Krentz know high design. Throughout their Town and Country home it is, quite literally, 10 feet above their heads.

Their ceiling treatments are a pristine example of some of the latest architectural details that ambitious and on-trend builders are offering to clients with an eye for whole-home design. And because they aren’t structural, treatment styles like beams, planking and coffering are starting to span the ceilings of living rooms, dining rooms and — in the Krentz home — kitchens and patio settings.

“Ceilings are traditionally bland,” proclaims Scott Paul, builder of the Krentz house alongside Jerry Delabout and co-owner of Vanderbilt Homes. “With more and more people going with neutral colors on their walls, a ceiling treatment really livens things up. And this is no exception. The treatments in this house were the idea of Karen Tonella, a very good designer who we love working with…this turned out very nice.”

Amy Krentz loved the idea of beams in the living room from the start of the design process. In the deft hands of Karen Tonella, a designer with Dynasty Interiors Inc., the idea of an eye-catching treatment spread to the kitchen. Dark planks offset by bright-white crown molding cross the ceiling and are paired with custom cabinetry to fill and balance the room.

The jaw-dropping masterpiece in the dining room came a little later. “The ceiling in the dining area was not designed until the home was being built,” Tonella says. “After we saw the shape of the room and the chandelier that Amy selected, we knew we needed to do a ceiling that complemented it.” The result is a detailed and unique configuration of planks and stately molding that give the space a fresh feel of its own—a feast for the eye for us bystanders, a happy surprise for Amy.

Built between late 2017 and mid-2018, their home is a downsize from their previous abode, Amy explains. The ceilings, she says, compartmentalize the open floor plan into distinct spaces that she originally feared would feel cramped. “The ceilings really give each area their own identity while also pulling everything together. There were so many fine details to consider; I love the rustic feel that came with the beams, but Karen took this above and beyond.”

Though Tonella explains that coffered and tray ceilings have been around for a while, she and Scott Paul agree that planks and beams­—or a combination of both— are a newer accent. “There is a whole range of materials that are available now,” Paul says. “You still have to watch your ceiling heights. Not everything works for lower ceilings.”

Taking to the sky may not be your first instinct to differentiate your décor, but take it from the Krentz team: throw pillows and paint just can’t bring this same level of drama and interest. “It’s the first thing people notice,” Amy says. “When I first walked in here, I felt like I was home. if we didn’t have these details it just wouldn’t be the same.”