From Analytical Data to Abstract Designs. 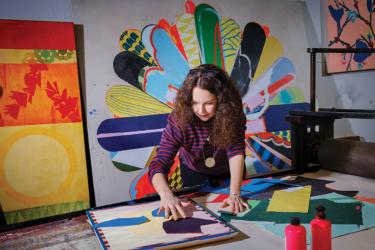 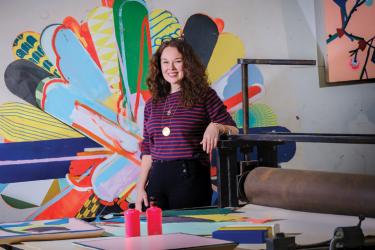 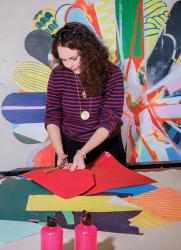 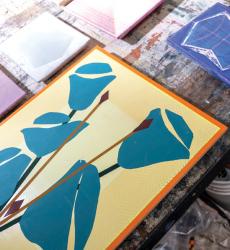 For Alicia LaChance painting wasn't something she mastered from childhood. In fact, it happened long after growing up in Webster Groves, her stint of working three jobs abroad in Europe and even her collegiate career and professional start as an industrial designer in Seattle. No, Alicia LaChance only became a painter once she became a mother. “After my children were born and circumstances required that I come up with a new way to get my ideas out in the world and be with my kids. My brother, William, said that I should paint, so I set up shop on the kitchen floor.”

From there she kept honing her craft and building her portfolio, “Every time I would sell a painting I would buy an artbook and gradually teach myself about art history. Then it was just exploring ideas and continuing to try and grow.”

And she did continue to expand her experience and find her voice as an artist. One of her most monumental inspirations was, unusually enough, visual data graphs. “That was a big shift in the work for me, just sort of looking at the way visual data graphs plot exchanges between people and the inherent botanical nature of that. It's just really beautiful seeing this plotted data create such natural imagery.” Beyond that, it became a way for LaChance to explore the data behind the graphs to shine a light on intellectual ideas through symbols, languages and colors.

As for how LaChance goes about creating one of her abstract paintings, it's all about “looking for the mysteries.” She elaborates on this idea by saying, “I'm interested in the gaps. I always like to equate it to jazz. You may be playing a series of notes, but it's the hang time, or the absence of a note, that makes you wonder. I always set out to create something that evokes that sensation and draws them closer. It starts there and then it's an exploration to find what comes next.”

Today LaChance, having raised her family and left them to forge their own paths, has a new perception and is using that on her most recent collection of paintings she's calling “The Ornament of Grammar.” Inspired by Owen Jones in his book “The Grammar of Ornament,” these new pieces are a reversal on his ideas in that, instead of looking at the different aesthetics that come from different cultures, Lachance is looking at the symbols and images that come out of cultural boundaries. LaChance explains, “It's fascinating to me that you can take these geometries, boil them down and yet that understanding can transcend cultures and borders.”

Along with this promising new focus on her art, LaChance is also working on getting her new website up and running and making a big move to a new workshop; she's also bringing a new and rare treat for local artists, a Peter Marcus print press. “I think there are like 10 of those that exist, and there are very few that are that scale. Seeing the ebb and flow of ideas and new artists using this machine will be so wonderful. I don't know what's going to happen, but I'm excited.”