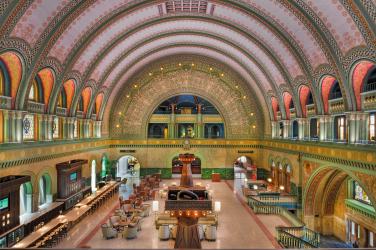 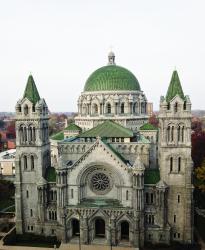 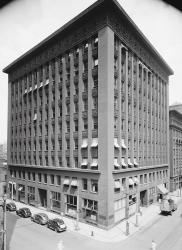 The city’s buildings and homes were styled with French Hamlet roofs, wrap-around porches and a trademark sparkling white. However, the style quickly changed with the growth of river trade. After the devastating fire of 1849, which burned down over 430 buildings, St. Louis passed a code requiring every building to be made of either brick or stone.

This new building code changed the way St. Louis was built, and the buildings erected shortly after 1849 make up what is referred to as downtown St. Louis. One example of an influential building that followed the new building code is the Wainwright building. Finished in 1891 by architect Louis Sullivan, the Wainwright building was one of the first true skyscrapers. Frank Lloyd Wright called it “the first skyscraper which truly looked the part.” It was featured on PBS as part of the “10 Buildings That Changed America.” The 10-story brick and steel masterpiece is now home to the Missouri State Offices.

Not long after the Wainwright Building, plans were set for the St. Louis Union Station. The first train left Union Station in 1894, and the building quickly started seeing an upward of 100,000 daily travelers. Architect Theodore C. Link designed the building after Carcassonne in France, pulling inspiration from the high walls and solitary towers.

The station boasts a 65-foot barrel vaulted ceiling with a wrought-iron chandelier. Though the last passenger train left the station in 1978, St. Louis Union Station is now a hotel and remains a social hub for tourists looking for an authentic St. Louis experience.

Several years later in 1907, Haynes and Barnett Architecture broke ground on the Cathedral Basilica, called in St. Louis “The New Cathedral.” The mosaic collection at the Basilica sets it apart from other St. Louis buildings, numbering 41.5 million pieces of mosaic tiles. The mosaics in the building were not completed until 1988, 74 years after the Cathedral held its first mass.

These are just a few of the dazzling architectural attractions of the area. Our Arch is just the gateway to the architectural marvels preserved for the enjoyment of visitors and locals alike.