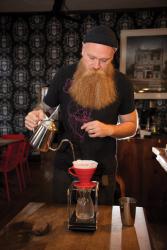 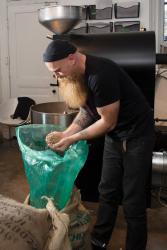 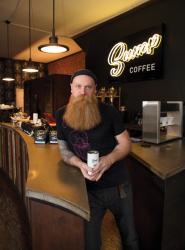 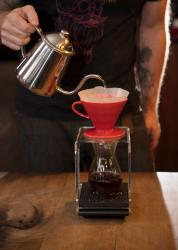 As a coffee shop owner, Sump Coffee’s Scott Carey is obviously serious with his java — and by “serious” we mean seriously obsessive. He left a solid career as an attorney for the uncertainty of opening up his first shop on Jefferson Avenue in 2011 and christened a long-awaited second location in Nashville in 2017. The rigor of juggling businesses in two states hasn’t dampened the renowned mad-scientist precision with which he crafts every cup. Even among the “coffee snob” set, he is sophisticated, perfecting every detail of sourcing, roasting, grinding and brewing down to the nth degree.

Scott’s dogged precision leads him these days to a more fastidious pursuit of the finest specimens from which to make his coffee, with a close focus on coffee beans at the peak of quality. He’s selecting small lots of rare coffee beans from small farmers all around the globe — not solely for their rarity, but for the superior flavors and aromas. He is partial to higher elevations that produce coffee cherries with more complex, concentrated flavors and the fruit-forward characteristics he enjoys.

While wet-processed, or washed, coffees are welcome, Scott is gleefully exploring those produced through natural drying. (With washed coffee, the seed — what is more commonly known as the coffee bean — is fermented in water after it is removed from the fruit.) He firmly latched onto the natural process when small Costa Rican farms where he’d been sourcing his beans were unable to carry out washing and took a different tack. It’s not a new concept but, as with any agricultural product, high-quality sources are hard to find.

“In Costa Rica it's called ‘alma negra,’ a natural drying process,” Scott says. “The cherry is dried and fermented with the seed intact. The natural process brings out more sweetness and notes of fermentation. Between the elevation of the source, the fermentation, the roasting, the brew, there are a lot of processes to play around with.”

Sump’s Costa Rica Alma Negra coffee is a prime example of the dry fermentation process. Because of the small batches and seasonal nature of the coffees, this product may be sold out by press time, but there are always new things to try at Sump.

Every bag of whole beans sold at Sump is marked with the provenance, the fermentation process, altitude, varietal, tasting notes and the roast date. If this all sounds suspiciously like winemaking, that’s no accident.

“It is a lot like winemaking,” says Scott. “I like the story that comes with each cup and we are happy to tell that story to anyone who is interested in it. The origin, the terroir, tasting notes — that story is what makes that cup coffee special.”

Enjoy Sump Coffee at the Jefferson Avenue shop or order a bag online at  sumpcoffee.com. Interested in other ways of riding Scott Carey’s caffeinated coattails into Javaland? Keep an eye on his coffee blog for information about brewing workshops, Sump Coffee-infused products (such as Perennial Artisan Ales’ Sump Coffee Stout) and announcements about the latest specialty roasts to hit the shelves.