In the Danish community of Solvang, California, small-town merriment makes it easy to slow down long enough to enjoy the holidays. 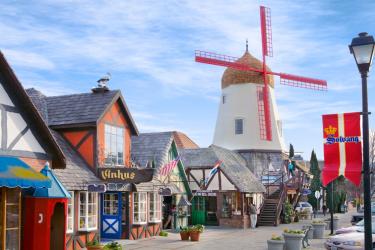 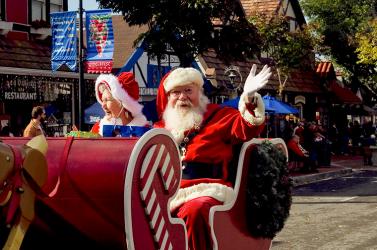 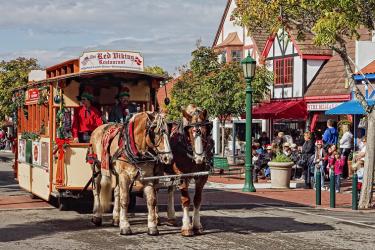 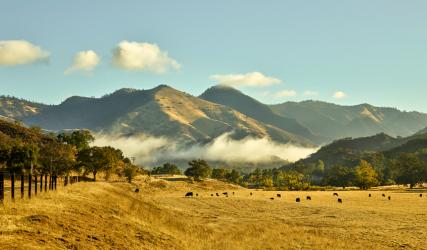 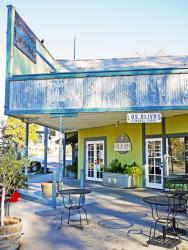 It’s beginning to look a lot like Christmas. For many of us, that means a Dyson clogged with pine needles and a seriously jam-packed schedule. When crowded malls aren’t stressing out the heartiest among us, it’s holiday baking, meal planning, cocktail parties, extended family gatherings and so on. Personally, if I forget to watch “It’s a Wonderful Life,” I might miss the whole point of the season.

This year, though, there’s a cure for the chaos: Solvang, California, where time moves to the easy tempo of horse hooves clip-clopping down tree-lined streets, and a quaint series of celebrations remind even the busiest urbanites what it means to feel merry and bright.

When I first rolled up to The Landsby, one of Solvang’s upscale hotels, I thought I’d stumbled upon a lost village from Epcot. Words can’t quite capture the Disney-style, thatched-roof charm permeating the Danish village planted 30 miles northwest of Santa Barbara in the Santa Ynez Valley, a wine region comprised of six communities.

Founded in 1911 by three Danish immigrants, Solvang, which means “sunny field,” was initially a Danish-American farming colony rooted in Old World tradition. Even as they assimilated, the Danes of Solvang continued honoring their heritage, speaking Danish at home, celebrating Denmark's holidays and eating traditional food from their homeland. In fact, it wasn’t until 1947 that Solvang became known as the Danish Capital of America, soon after the Saturday Evening Post ran a story on the “spotless Danish village that blooms like a rose in California’s charming Santa Ynez Valley.”

When the town realized its potential to attract tourists, new provincial-style buildings went up, along with a handful of windmills, and Main Street became Copenhagen Drive. Despite the souvenir shops, Solvang retains a lot of its authenticity: Many Danish-Americans still consider it their cultural home and most local bakeries are owned by descendants of the town’s original settlers.

A month-long celebration called Julefest (pronounced Yule-fest) is how Solvang welcomes Christmas, and the town’s kringle-scented bakeries are a good place to start a cultural immersion. Olsen’s Danish Village Bakery displays a giant gingerbread house during the month of December. A few blocks east, The Solvang Bakery is famous for its gingerbread houses, which are popular among celebrities and ship nationwide.

With average daytime temperatures in the mid-60s, you aren’t likely to see any snowfall in Solvang. But in the nearby town of Buellton, 20 tons of powder is trucked in for Winterfest, Sunday, December 2. The annual event includes breakfast with Santa, a traditional tree-lighting ceremony and a parade of lights through the town’s holiday-themed village.

Back in Solvang, the season kicks off on Friday, December 7, with the Julefest tree-lighting ceremony in Solvang Park, a modest green space scrunched between some 150 boutiques all decked out for the season and peddling everything from Danish clogs to high-quality antiques (try Solvang Antiques).

The tree-lighting ceremony is a charming event drawing hundreds of visitors for live bands, caroling, dancing ballerinas — and the arrival of Santa. (If you’re traveling with children or grandchildren, Santa poses for photos from 4 to 6 p.m.) The festivities continue on Saturday, December 8, with a Julefest Parade with more than 400 participants marching, cruising and strolling around the town’s main streets.

Window-shopping is a great way to while away a day in Solvang, and the town’s eclectic businesses run holiday deals and host special events December 7-9 and December 14-16. But there’s more to the Santa Ynez Valley than cute stores. With bentgrass greens accented by mature oaks, the two 18-hole championship golf courses at Alisal Guest Ranch and Resort offer spectacular views of the foothills and the Santa Ynez Mountains.

If you’re up for a steep hike, Gaviota State Park, south of Solvang off the 101, has a stunning cluster of windswept caves. Located in River View Park in Buellton, the Santa Ynez Valley Botanic Garden (open year-round, sunrise to sunset) is a beautiful place for a stroll. But when the weather’s crisp, a treatment at The Spa at Fess Parker Wine Country Inn is another great way to dissolve holiday stress.

You’re in wine country, so you’ll want to explore a few of Santa Ynez Valley’s 120-plus wineries and vineyards, preferably by horseback during a 90-minute tour of the 714-acre Fess Parker Winery and Vineyard in Los Olivos (offered through KAP Land & Cattle). For tastings, try Gainey Vineyard or Buttonwood Winery & Vineyard, the latter of which serves a hoppy chardonnay that’ll entice the most devout beer lovers.

If possible, I recommend closing a trip with a free candlelight tour of Solvang, departing from the Solvang Visitor Center at 5 p.m. every Saturday in December. Participants explore the town’s downtown district, while a costumed interpreter discusses the region’s unique history. Between the glistening holiday light displays and heartfelt caroling, it’s the perfect ending to a perfect day.    See stlouishomesmag.com for more photos and resources.