When nowhere else can compare

These world-traveling homeowners could have chosen to live anywhere but decided to renovate instead. 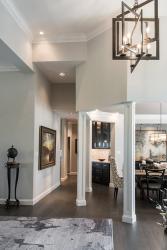 Liston redesigned the columns framing the formal dining room, which is open to the foyer and adjoined by a butler’s pantry.  Surrounded by host and side chairs from Arhaus, the unique concrete dining table and transitional lighting fixtures were sourced from Wilson Lighting. 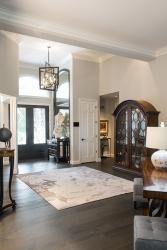 The entry arch was removed, emphasizing the great room’s 14-foot ceiling, and a “free-standing” coat closet defines the foyer. 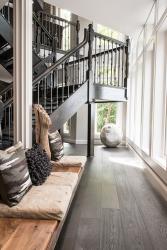 Removal of the atrium planter allowed for creation of a view-packed “meditation area” at the foot of the refurbished wrap-around staircase. Now fully open to the kitchen, casual dining are, and great room, the cathedral-ceilinged hearth room overlooks the multi-level deck and “treehouse.”   The dramatic fireplace design, with stacked-stone surround, floating hearth and beam mantel, is repeated in the great room and lower-level entertainment area.  Sleek leather seating and a reclaimed wood dining table accentuate the theme of natural materials. 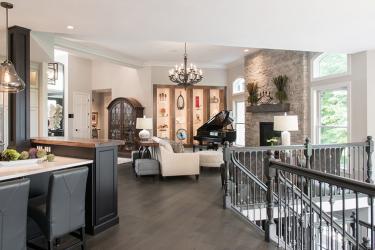 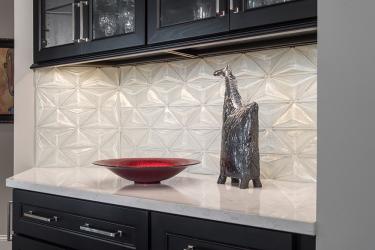 A display cabinet with custom-crafted live-edge walnut top brackets one end of the kitchen island and complements a load-bearing column, refinished by Liston. Visual continuity was key to the overall design, as evidenced by the matching fireplaces (top) and the beam and support column in the lower level bar area (bottom). 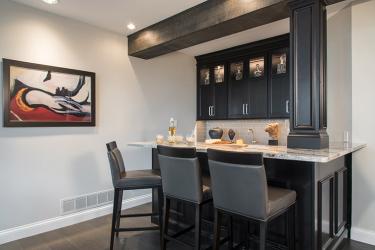 Addition of a ceiling beam, plantation shutters and transitional furnishings transformed the master bedroom into a tranquil, sophisticated retreat. Staying attuned to the latest housing trends is something that has always interested this West County couple, but it’s hard to understand where they found the time.  Together, they’ve raised two children, traveled to 65 countries and founded a full-service, national convention and trade show company that’s headquartered here in St. Louis.

On the other hand, their business entailed everything from the latest technologies to creative and spatial design, so it’s logical to assume their professional expertise would carry over into their personal living environment.

What’s surprising, though, is that this cosmopolitan couple has lived basically in the same suburban neighborhood since the 1970s. In fact, when ready to build a custom home in the mid-‘90s, they found a spectacular property just blocks from their existing home, with views that stretched for miles above the treetops of Creve Coeur Park.

The site was ideal for an atrium ranch, the height of fashion at the time. With a California-style Dryvit exterior, their spacious custom ranch encompassed 3,000 square feet on the main floor, another 2,500 square feet on the finished lower level and a multi-level deck leading to an octagonal “treehouse” for hosting party guests.

Several years later, a few updates were made to the residence, but in 2015, the “itch” for something “more modern, yet comfortable” resurfaced. The children were now grown, the homeowners had more-or-less retired, and they began looking for something new. After an exhaustive search, however, the couple could find nothing that compared to their lofty aerie and decided to undertake a major renovation instead.

Liston Design Build, an award-winning, second-generation firm co-owned by Keith and Jeanne Liston, was chosen for the project. Attentive client communication has been fundamental to the building company’s success, and Jeanne describes the process that followed as “highly collaborative.”

The homeowners’ initial priorities included remodeling the kitchen, eliminating the atrium, opening the main-floor activity spaces and converting outdated niches into more contemporary display cases for special items they’d acquired during their travels. Interior construction began in December; the couple moved to a nearby condo for the duration; and by early June, the residence had undergone an astonishing transformation.

It would be impossible to recount the hundreds — perhaps thousands! —  of aesthetic and high-tech details that were incorporated into this whole-house makeover, but here are the basics. The atrium was removed and replaced with wide-plank engineered oak flooring from St. Charles Decorating Center that extends throughout both levels. Lined by a two-story window wall, the wraparound atrium staircase was still central to the floor plan but updated with gleaming wood handrails and wrought-iron balusters.

Expanded and reconfigured, the kitchen is defined by a large work island with an apron-front sink and seating for five. LED-lit display cases top a vast span of custom-painted cabinets and built-ins from Beck/Allen Cabinetry, and the espresso-hued island base is a striking contrast to the creamy Cambria quartz surfaces. A display case with live-edge walnut top, custom made by a local craftsman, braces one end of the island and, completing the effect, the load-bearing column is wrapped in dark-stained millwork.

In the great room, a lighted display wall showcases the owners’ favorite collectibles, and further enhancing the décor, distinctive new lighting fixtures and many of the main-floor furnishings were sourced from Wilson Lighting. Elsewhere in the home, the master bath was stunningly redesigned, the laundry room reworked and the secondary baths all outfitted with stylish plumbing fixtures, new cabinetry and hardware.

Visual continuity is another of the home’s most impressive features. Light and dark elements draw the eye through the various spaces. Massive, rough-cut maple beams accent the ceilings in the peaked hearth room, master bedroom and downstairs entertainment space. The rough-hewn wood theme is repeated in the three gas fireplaces from C. Bennett Building Supplies, which were transformed from classic to contemporary with dry-stacked Eldorado Stone surrounds, floating hearths and wood beam mantels. Attentive to every detail, Liston refinished all of the decorative and support columns —  from the open formal dining room to the lower-level bar —  for a more modern, streamlined look that’s consistent throughout the home.

Although no major structural changes were made to the lower level, the atrium planter, now covered in flooring, became a “meditation area” with comfy seating and Zen-like views of the park. The exercise room was moved to the “treehouse” and replaced by a custom-crafted wine room with stacked-stone walls, and the bar was reshaped and appointed with sleek new cabinetry and a clear-glass subway tile backsplash.

The husband’s passion for technology is obvious, and he made sure that every home automation system currently available was built into the residence. Gleefully demonstrating how all of the functions can be controlled from a single hand-held device, he credits Tim Root of Premier Audio Video for installation of the state-of-the-art sound, video, electrical, and lighting systems.

In mid-2016, the owners settled back into their magnificently rejuvenated home and took a breather for several months before starting “phase two” of the project… the exterior. Work began in early 2017 with construction of a retaining wall, followed by removal of the front porch. The front elevation was then given a complete facelift, replacing the outdated synthetic stucco with handsome stonework.

Considering the magnitude of the renovation and the end result, Jeanne Liston’s description of the client/builder working relationship as “highly collaborative” may have been something of an understatement. Superbly crafted inside and out, this extraordinary residence is as unique and sophisticated as its owners —  and a tribute to Liston Design Build’s masterful ability to interpret their vision.