Urban Buds: City Grown Flowers and Flower Hill Farm are going back to the roots and growing flowers locally. 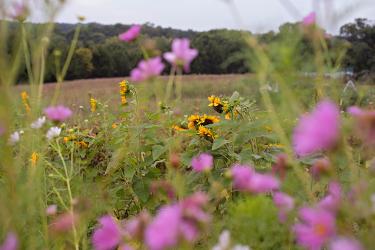 A haze of purple cosmos frame sunflowers and a field of zinnias beyond at Flower Hill Farm. 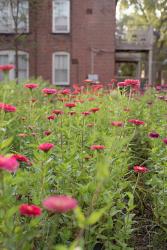 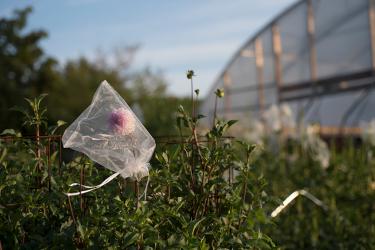 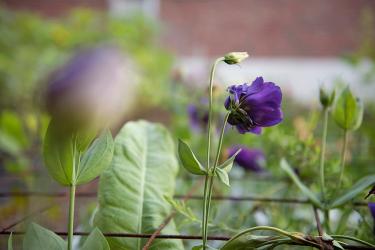 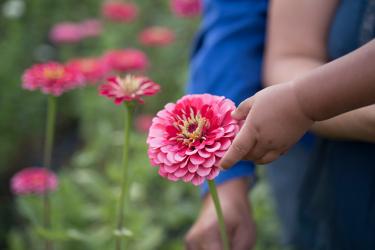 One of many varieties of zinnias at Urban Buds: City Grown Flowers. 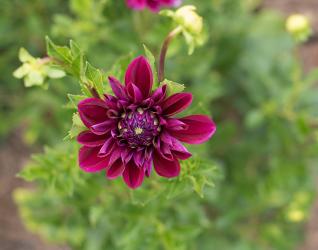 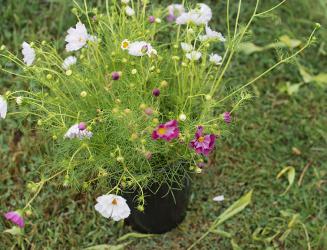 A bucket of recently harvested cosmos from Flower Hill Farm. 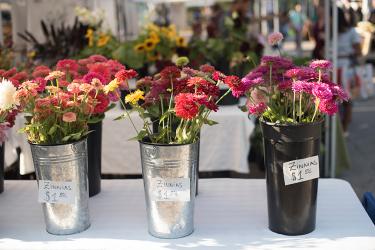 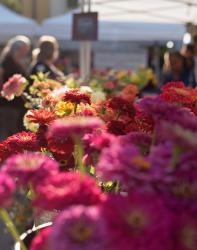 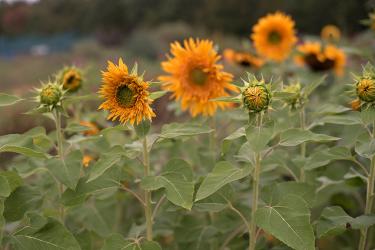 One of many varieties of sunflowers at Flower Hill Farm.

The settings couldn’t be more different. One sandwiched in the city, bordered by brick buildings and alleys; the other spread over multiple acres and accessed down a long gravel driveway.

At heart, however, they are one and the same. Both sites overflow with flowers. Glorious, colorful exquisite flowers. Flowers to gladden the heart. Flowers to soothe the soul.

Food purveyors have long touted the benefits of “farm-to-table” cuisine.  “Farm-to-vase” flowers are a kindred movement in a desire to literally go back to our roots. Locally, flower farmers Karen “Mimo” Davis and Miranda Duschack of Urban Buds: City Grown Flowers in St. Louis’s Dutchtown neighborhood and Vicki Lander and Jack Oglander of Flower Hill Farm in Beaufort, MO, an hour southwest of St. Louis, are proud proponents of this beautiful trend.

Their blossoms, harvested daily, go directly from richly amended soil to dinner centerpieces, bridal bouquets and end-table arrangements. Traditionally, local floral designers relied on blossoms packed in boxes and crates and shipped to St. Louis from hundreds, if not thousands, of miles away. Flowers from the nearby farms come in water-filled buckets directly from the grower and, unlike hothouse or tropically produced blossoms, are more likely to reflect the changing seasons. In addition Urban Buds: City Grown Flowers sells to the public each week at the Tower Grove Farmers Market. Flower Hill Farm blossoms are available at the Maplewood and Wildwood Farmers Markets and at monthly pick-your-own bouquet events, advertised on their website.

Mimo Davis has a 25-year history of growing beautiful flowers; first at Wild Thang Farms in Ashland, MO, and now in the city. “I have always had a passion and love for flowers,” she says. “Flowers feed my soul. Anybody can grow food; go to a farmers market and you will see tomatoes everywhere. Not everybody can grow good flowers. There are many ways to feed people, not just with food. We are feeding people’s spirits.”

Mimo and Miranda became acquainted when both worked as agricultural extension agents for Lincoln University. While Mimo’s expertise was flowers, Miranda’s was in agricultural production, livestock and bee keeping. In 2012, they teamed up to purchase an historic farmstead at 4728 Tennessee Avenue with a history of flower production dating back to the 1870s. Much of the farm had been sold off, but an acre of property, including a greenhouse and remnants of a florist shop, remained. The two women set about clearing the overgrown land, reclaiming the greenhouse and since have incorporated other nearby vacant lots into their urban farm. This coming year, due to a grant received from the Missouri Department of Agriculture for cut-flower production, they will be producing flowers year round using their greenhouse and three recently constructed “high tunnels.”

They are partners in life as well as business. In June 2014, Mimo and Miranda were one of the first four same-sex couples to successfully challenge Missouri’s gay marriage ban. One of their greatest joys, their website notes, is growing and arranging flowers for weddings and incorporating seasonal, locally grown flowers for the special day of all couples. More information on their floral design business and Urban Buds: City Grown Flowers can be found on their website.

“I have a passion for what we are doing and growing flowers in the city,” Mimo continues “ I feel that we are bringing agriculture to where people have access to it. We have taken vacant lots and turned them into aesthetically beautiful places where people who may not be able to afford our flowers can still appreciate them. We don’t put up fences or gates because we want people to be able to see what we are growing. We are asked if we have a problem with people stealing our flowers. We do not.”

Flower Hill Farm’s Vicki Lander completed the Master Gardener course in the early 1990s while working as a massage therapist and yoga instructor. She continued with her main career but, from that time on, her lifelong love of the outdoors drew her to begin working on the side in a wide variety of jobs related to gardening. She was renting land for a vegetable garden on an old farmstead in Ferguson when the EarthDance Organic Farm School moved in next door. She first participated in the educational program and eventually became farm manager.

In the small world of St. Louis, she crossed paths with Mimo Davis, then working with the Lincoln University Agricultural Extension Service. The two women knew each other previously when Mimo sold flowers from her Ashland, MO, farm at the Clayton farmers’ market and Vicki was a customer. They renewed that friendship to such an extent that Vicki and her husband Jack Oglander included Mimo in an invitation they had received to participate in a Slow Food conference in Turin, Italy.

For a number of years Vicki and Jack had been considering living rurally. When in 2011 Vicki’s sister, a real estate agent, found a 35-acre property in Beaufort that included a pond and a greenhouse that had been chemically free for 30 years, they were ready to take the plunge.

What to grow on the land was a bit up in the air. For several years Vicki had been “training apprentices (at EarthDance) to be vegetable farmers, and I didn’t want to compete with them. Mimo encouraged me to grow flowers. At that time there wasn’t anybody doing flowers for the St. Louis farmer's markets. She also encouraged me to become a member of the Association of Specialty Cut Flower Growers.” Even with that encouragement, Vicki and Jack credit much of their success with their acceptance in the Missouri Beginning Farmer Entrepreneurial Program, which included extensive visits to four different farms, including one in Burlington, VT. The program emphasized creating a viable, three-to-five-year business plan.

Both flower farms rely on chemical-free, organic farming techniques and integrated pest management. While Urban Buds: City Grown Flowers flowers are grown in a more controlled environment, Flower Hill Farm blossoms are subject to the whims of woodland creatures. That can be helpful in the case of barn swallows that arrive seasonally and consume numerous bugs that might chew on the blossoms. Browsing deer, however, destroyed several years of sunflower crops, just as they were budding, until Jack constructed a multi-level deer fence and a tenant farmer renting some of their acreage moved in with a livestock-herding Great Pyrenees mountain dog.

Whether a professional grower or in your own garden, harvest flowers very early in the morning or after 6 or 7 in the evening, Vicki advises, and know that each variety needs slightly different handling to prolong life. Fresh-cut daffodils should be left in a vase of water for at least three hours before combining them with other flowers to clear the gooey substance from their stems. Dip fresh-cut hydrangeas in alum to prolong life. Vases need to be immaculately clean and water changed frequently. To grow cut flowers in your own garden, look for tall varieties with long stems rather than dwarf varieties hybridized to be more compact and neat. Cut long stems to encourage stem growth.