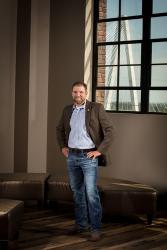 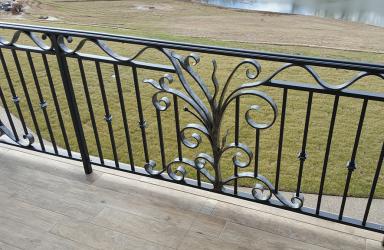 Mike Kinnikin was born to be a craftsman, literally! At a very early age he learned the trade at his parent’s family-owned business Eureka Forge. He worked summers and weekends until he went to college. Mike has a degree in mechanical engineering from the University of Missouri-Rolla. Upon graduation he turned down several job offers in order to join his father at Eureka Forge. When Mike’s father fell ill, he took over the company with the support of his parents and made it his goal to keep Eureka Forge moving forward. Mike has won numerous awards through the National Ornamental and Miscellaneous Metals Association (NOMMA), and he was recently nominated to a three-year term on their board of directors, a seat previously held by his father five years earlier.

SLHL: Please share an experience that was a major influence on your career decision.
Mike: Out of college, I went to work for someone else. It was there that I realized I didn’t want to work behind a desk. I needed the ability to be creative and hands-on in my work.

SLHL: What has been the best compliment you've received in your career?
Mike: National Top Job Awards from my peers at the National Ornamental and Misc. Metals Association as well as recommendations and positive feedback from satisfied customers.

SLHL: Tell us a story from your childhood where your creative design genius kicked in.
Mike: I built a steel sculpture of a car when I was 12 years old. It was the relative size of a power wheels car. I took parts off of a working power wheels car, added them on top of my sculpture and made it drivable.

SLHL: What is your favorite spot in St. Louis and why is it your favorite?
Mike: St. Louis Zoo. My daughter loves to see the animals and run from exhibit to exhibit. I enjoy the outdoors and animals as well, so the Zoo provides a wonderful bonding experience for us.