Turning a Negative Into a Positive

Drainage issues forced Ladue homeowners to overhaul their front landscape with the help of Poynter Landscape Architecture turning a mess into a beautiful solution. 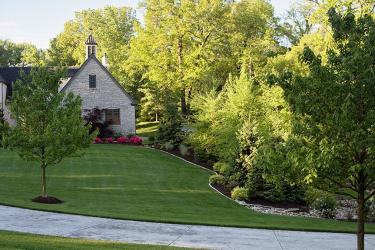 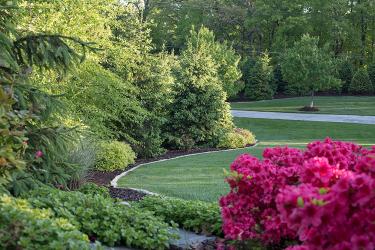 John and Kim McCurdy were lucky to even catch a glimpse of their Ladue home from the road prior to purchasing it in November 2013. “It’s a 25-year-old home,” Kim says, “it was so overgrown that people drive by and ask if it’s a new house.” But despite the ‘mind-boggling’ masses of invasive honeysuckle, the puddles of standing water, and the “deferred maintenance issues,” as Kim gingerly understates, they saw the house and they saw the potential.  “We knew what we were in for,” she says.

The McCurdys enlisted Bob Wilhelm of Poynter Landscape Architecture to survey their plans and their property, and he agreed that there was a manageable and manicured landscape beneath the mess. “It was kind of an erosion nightmare,” Bob recalls of the nearly year-long project. “There are occasions when there is no way to fix the problem, and not every drainage problem has a solution.” Fortunately for the McCurdy property, however, Bob’s knowledge of what works and what doesn’t unveiled a reasonable and beautiful solution.

“We didn’t want to deal with any water issues,” John explains, “and for me, every view from the street needed to be beautiful.” Their original plans—a swale, keeping the gravel driveway, removing some trees, and grading—slowly evolved into a complete rehab that included diversionary berms to redirect the water, a water catch basin to delay re-entry into the city’s system, and a reconfiguring of the entire front yard.

“It was like a giant quarry,” Kim says of the first few months after starting from scratch, “no plants or grass at all.” Prioritizing the “front” yard of the biasedly cut two-acre property, Bob and Poynter cleared, graded and set to solving the water issue, which had created wash areas long hidden by the overgrown honeysuckle.

“Landscape architecture is all about turning a negative into a positive,” Bob says. “It’s about taking a problem, solving it, and then making it more beautiful. Grading has to work with landscaping that has to work with irrigation and so on.”

His holistic-solution mindset is shared by John, a true Poynter believer and, now, the primary caretaker of the renovated estate. “You get a sense of how everything goes together, and how their experience and foresight went into everything. Everything was planned. Every single plant was planned.”

Once the problems were solved, the real fun began. Plants and trees were selected for how they would appear during colder months and for their growth two, three or four years from the project’s end. Over 50 Norway Spruce, known for their dense, dark-green foliage and rapid growth, were planted to create a natural privacy wall between the residence and Ladue Road.

And the gravel driveway? They had it replaced with sealed concrete after a gravel shard was tracked in via a shoe sole, tearing up the floor. “Now I can go out on the driveway without shoes on at all,” John says excitedly.

From the road, the charming French Country home appears nestled among stone-bordered flora and a lush greenscape of Fescue turf. It’s a lot to take in, those involved will admit, but to see it is to love it. “You don’t even notice the landscaping,” Bob says, sharing one of his goals for the project, “you see the beauty of the home.” And for the first time in a very long time, the city of Ladue can do just that.

Check out more about this project, including a video, by visiting Poynter Landscape Architecture.