A traditional Central West End condominium gets a new look with décor that is both warm and contemporary. 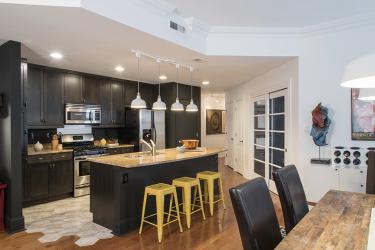 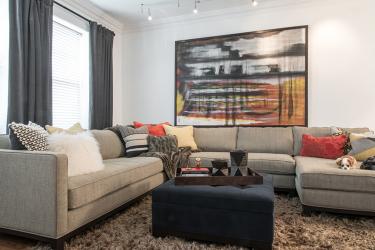 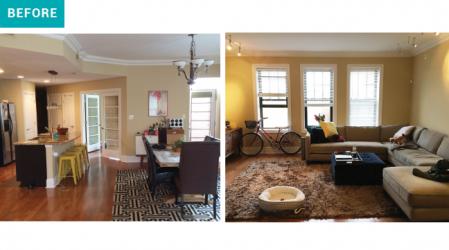 After four years in a Central West End condominium, Aaron Speropoulous and his fiancé Sabrina Padgett felt overdue for a change. Roomy but bland, their open living/dining area lacked the personality of its owners and their vivacious long-haired chihuahuas, Djasper and Rufus.

“The color was basic beige color, and I really don’t like that, so I painted everything,” Aaron says of the white walls throughout that now allow him and Sabrina to showcase interesting work from local artisan Zack Smithey and other artists. “We’re both really big fans of art, so in that respect we wanted to not be married to a color palette. If we picked, say, seafoam green for the walls, I feel like we would be stuck with a certain color palette, plus, we wanted something that would give the attention to the art.”

But the space still needed that extra something. Maybe a lot of extra somethings. Sabrina and Aaron met designer Mike Wyrock at I.O. Metro and quickly struck up a friendship discussing art and furnishings that would complement the classic space and the lovebirds’ contemporary tastes. The three kept in touch as Mike and his business partner Justin Maine started up Nistenhaus Design, and continued to work together to breathe new life into the place.

The biggest, most dramatic change was to the kitchen, which adjoins the living room in the open floor plan. Inspired by a leak under the refrigerator, Mike replaced the damaged wood in the kitchen with six-sided gray-and-white tile flooring that “bleeds” into the surrounding wood. From there, Aaron says, “We both had 100 percent trust in him.”

So, while the young couple vacationed in Europe, they left him to his devices to finish the interior design.  He overhauled and layered the décor, leaving price tags on each item so the two would know exactly what the project would cost. With an art aesthetic in common with Aaron and Sabrina, the designer had a natural feel for how to arrange things into places that felt non-negotiable.

“We worked in additional pieces and some of the pieces they already had,” Mike says. The period of free reign was also an opportunity to demonstrate to a semi-reluctant Sabrina how layers of texture and color throughout—in the window treatments, pillows, rugs and things collected during world travel—could bring warmth to the space without taking a turn to the mumsy. “It was tricky because their style is a little more modern and some of those condos in the Central West End are more of a traditional architecture,” explains Mike. “When we got back from Germany, it was like walking into a new home, it was the coolest thing,” Aaron says. “We bought everything they had.”

Now, whether they’re unwinding from a long workday or settling back in after travel, Aaron and Sabrina know they’ll return to a living space that finally feels like home. “It’s got more of a warm feeling,” he says. “It’s so nice at the end of day to come into a room that is so welcoming and warming.”