The Relvas return to their shared agriculture heritage planting vines and cork trees. 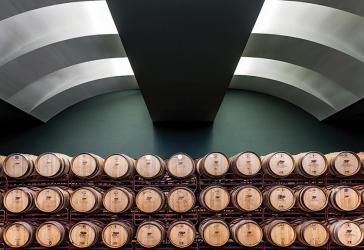 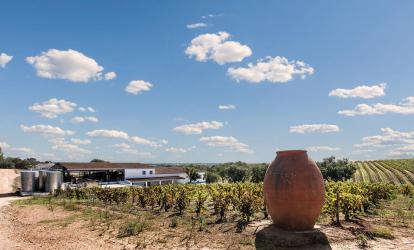 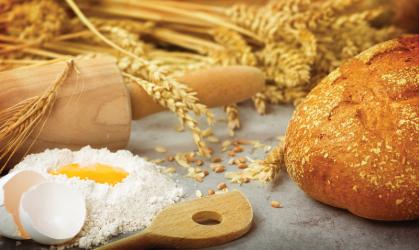 It was once common that the majority of smaller vintners were farmers whose grape vines shared acreage with orchards, olive groves and even fields with corn, wheat and vegetables. Horses, cows, pigs and chickens might be roaming the grounds. In other words, a working farm.

As winemaking became big business, the vines took precedence, and the vast majority of multi-crop farms disappeared, especially in the major wine regions of the world. Today, with the increasing popularity of the farm-to-table movement among restaurants and chefs, and the increasingly common conversion of land to organic and sustainable farming practices, some wineries are returning to their farm roots, especially in less well-known wine regions.

Nowhere is that more evident than in the Alentejo – a region between Lisbon and the southern coast in Southeast Portugal – that is considered the hottest part of Europe, with summer temperatures often exceeding 100 degrees and the climate varying from hot-summer Mediterranean to semi-arid. Long known as Portugal’s bread basket, it has vast open countrysides with undulating plains and rich, fertile soil.  With very few exceptions, all the major towns are mainly reliant on agriculture, livestock and forestry. Many of the properties in this region are called herdades – homestead or large farm in English.

Vines are an increasingly common site in the most fertile parts of the region, mainly in Redondo (near the foothills of the Serra D’Ossa Mountains, in a southwestern section of the Alentejo) and Evora, which is largely flat plains. This region is also home to an ancillary, but key ingredient in wine production – vast cork tree forests, many of which have been growing in the area for over 300 years.

It is the combination of vast cork forests and vineyards that brought people with farming backgrounds to this region. Among them, in 1977, was Alexandre and Cristina Relvas. Cristina’s family has a viticultural background going back three generations – her grandfather was one of the most famous viticulturists in the Beira region of Northern Portugal. Alexandre’s family were farmers, also for three generations, cultivating mostly wheat and raising chickens for sale, in Angola, the African nation that was a Portuguese colony until 1975.

The young couple had lived in Lisbon for a number of years, but long wanted to return to their shared agricultural heritages, as well as have a second home where they could plant some vineyards to make top-quality wines and start a forest of cork trees. They bought land in the Redondo area that was already called Herdade Sao Miguel. The trees came first in the late 1990s and then, in 2001, the Relvas planted vineyards (mostly with the traditional red Portuguese grape varieties such as Aragones, Alicante Bouschet, Touriga Nacional and Trincadeira, and some white grapes like Antao Vaz, Arinto and Verdelho). A state-of-the-art winery followed in 2003, with the first bottles of Herdade Sao Miguel Red Wine coming to market in 2004.

In less than 20 years, Alexandre and Cristina created a successful cork business, now with over 247 acres of cork trees they own, and another 1,850 acres of cork and pine forests they manage, vineyards and a winery producing the award-winning and highly-rated labels Herdade Sao Miguel and Herdade de Pimenta. If that weren’t enough, they also own approximately 400 female sheep used for breeding purposes. Both of their sons are working with them on the winemaking side – Alexandre Relvas, Jr. as chief winemaker, and his younger brother Antonio.

Like many of their neighbors, who are making fine, artisanal wines alongside other specialized agricultural pursuits such as raising prized Portuguese blackfooted pigs or special breeds of cattle that are revered for their tender meat, the Relvas family approaches everything they do with a great respect for the natural way. That extends to their table, which is often laden with the gourmet bounty of their own land and that of the surrounding farms, as well as fresh fish from the long Atlantic Ocean coast into which the Alentejo’s Western border spills.

Here, the real meaning of farm-to-table is evident in the cheeses and chorizo sausages made down the road, the breads baked daily in the local town’s bakery, the olive oil and honey that doesn’t travel more than a few kilometers from the Relvas dining-room table.

While cod, in all its variations (salted, stewed, grilled), is Portugal’s national fish, farmers in the Alentejo favor local seafood stews cooked in a Cataplana, a unique clam-like pot. Traditionally, local fishes are combined with saffron, sorrel and, sometimes, white wine or vermouth. The cover is not removed until the pan reaches the table, emitting intensely fragrant aromas that are nearly as satisfying as the first fork-and-spoon full. If making this dish at home here in St. Louis, an array of clams, shrimp and other shellfish, as well as firm-fleshed fish like monkfish or sea bass, can be added.

While a bit harder to fill one’s table with local bounty when that table is in a large city, the number of farmer’s markets (especially in summer) and gourmet shops bringing local agricultural products to city-dwellers, is growing. And the city’s wine merchants, carrying exquisite wines such as those made by the Relvas family from up-and-coming wine regions like Portugal’s Alentejo, make it easier to enjoy the farm-to-table experience here at home.