This stunning luxury loft typifies the residential renaissance taking place in The Lou. 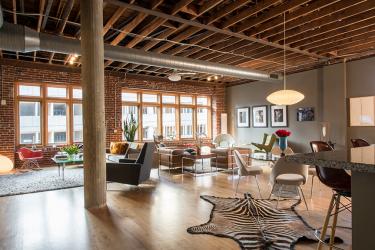 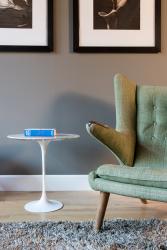 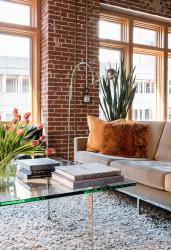 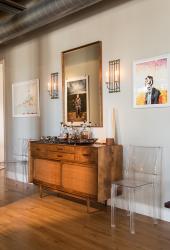 Converted from a walnut Russel Wright bedroom dresser, the dry bar is flanked by Philippe Stark ghost chairs and stylish sconces from TFA. Reflected in the mirror is a Geoff Story photograph the owners have self-titled "Grandma." 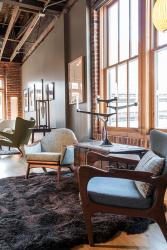 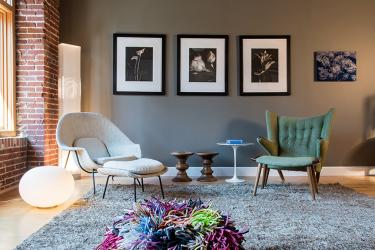 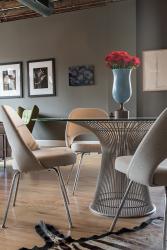 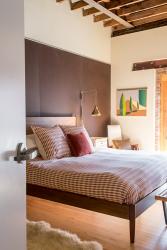 The master bedroom's architectural features are complemented by wood paneling, a walnut bed and linens from West Elm, rustic chests repurposed as end tables and a landscape by Ken Worley. 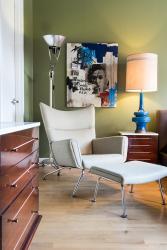 Authentic Mid-century furnishings in the guest bedroom include a Hans Wegner wing chair with ottoman and a high-gloss dresser and bedside table topped with white Formica.

Greg Lukeman and Justin Scarbrough have a passion for chairs. At last count, there were 23 designer seating pieces – each acquired for its unique Mid-century styling – arranged throughout their 2,500-square-foot downtown loft. But let’s start at the beginning…

A metro-area native, Greg consults with local nonprofit organizations. Intrigued by the energy and attractions of urban living, he moved from West County to a rental property in the city in 2009 to “test the waters.” Soon after, he met Justin, who is the VP of operations and sales for a marketing research firm specializing in insurance and came to St. Louis from Kentucky 15 years ago. Among their many commonalities were “complementary art tastes,” including a preference for Mid-century modern design.

Pleased with the city’s vibrant lifestyle, they made the decision to invest in a home in the downtown area, subject to four basic requirements. It had to be on the top floor, with personal outdoor space, private laundry facilities and indoor parking. Meeting all of their qualifications was a spacious two-bedroom loft occupying half the top floor of the historic Alexander Building. Built in 1906 and listed on the National Register in 2004, the five-story structure was renovated in 2005-07, together with the neighboring Spool Thread Building. Once a major national supplier, Spool Thread manufactured the cotton and silk thread used in the Washington Avenue garment district.

The view-packed residence is characterized by the interior features often found in St. Louis’ trendy lofts, including vast banks of windows, exposed brick walls and HVAC ducts, sturdy support pillars and ceilings that soar to 16 feet at the beams and open to the superstructure beyond.  “We call it our ‘ranch in the sky,’ ” Greg quips, remarking on the convenience of single-level living.

Although most of the furnishings came from the owners’ previous residence, a few new additions have been made since moving in to accommodate the larger space. The loft’s primary activity areas – kitchen, dining, living and TV rooms (whimsically referred to as the “drawing” room) – are completely open, presenting a challenge for furniture arrangement. And this is where the owners’ prodigious collection of chairs becomes important. “We can move the furniture around for entertaining,” says Greg, “or we can even change the entire floorplan at will.”

The adjacent dining area is furnished with a sleek Herman Miller ensemble – streamlined chairs and a dynamic glass-and-stainless pedestal table, accented by a zebra-skin rug from Ken Meisner. In front of the windows, a cozy conversation grouping features two gray/blue Adrian Pearsall chairs and an 18th-century traveling chest from Jules L. Pass Antiques. Atop the chest is a Tom Dixon candelabrum that illustrates the owners’ design acumen.  “We’ve let the candles drip to create movement,” Greg explains.

In the “drawing” room area, the wall color transitions to a soft khaki tone, and a Florence Knoll sofa from Herman Miller, glass Barcelona coffee table and hand-knotted Kasthall rug delineate the living room. It’s the skillful arrangement of the owners’ fabulous collection of designer chairs that separates this expansive open space into distinct living and TV rooms, however. A sampling includes a white Saarinen womb chair from MoModerne; a Wegner papa bear chair in soft green from Rocket Century; two Le Corbusier leather chairs from Centro flanking a Milo Baughman table; a vintage plycraft Mr. chair; an airplane chair from Design Within Reach; a black Milo Baughman leather chair from TFA The Future Antiques; and the list goes on…

Random floor orbs provide subtle lighting for both spaces and, illustrating the owners’ sense of humor, a colorful “ottoman” made of shredded flip-flops and a red Mezzadro stool by Archille Castiglioni lend a fanciful touch. “Justin grew up on a farm, and the stool reminds him of a tractor seat,” Greg laughs. Serious again, he mentions that one of the unique aspects of their collection is that many of the chairs include ottomans, something of a rarity with Mid-century designs.

Conveniently positioned for entertaining, a walnut Russell Wright bedroom dresser has been separated from its mirror and converted to a credenza which the owners use as a dry bar, liberally stocked with Justin’s favorite Kentucky bourbon.

Moving to the loft’s privacy areas, a long hall accesses the master suite. Dominating the hall’s side wall are huge enlargements of two pensive photographs by Geoff Story. One of the studies has a distinct oriental flavor and is a particular favorite of the owners, which they’ve self-titled “Grandma.”

The master bedroom’s open-beamed ceiling rises to approximately 18 feet and, reinforcing the loft’s industrial ambience, an exposed metal beam calls attention to the patio doors accessing the balcony. Wood panels line the wall behind the walnut bed from West Elm; rustic chests from Jules Pass have been repurposed as nightstands; and at the foot of the bed is a George Nelson bench. Throw rugs – one a woven Indian piece, the other freeform and plush – add color and texture to the gleaming wood floor.

In the opposite wing, sage green walls establish a tranquil atmosphere for the guest bedroom. West End linens cover the upholstered bed, and a Hans Wegner wing chair with ottoman fills one corner. Faithful to the home’s Mid-century styling, the high-gloss dresser and side table from Rocket Century are topped with white Formica, and a classic blond Thonet chair sits under the windows.

When it comes to wall art, the owners’ tastes are eclectic, but lean toward the contemporary. Blending nicely with the loft’s décor, many of their acquisitions have come from the Contemporary Art Museum.

Delighted with their chic “ranch in the sky,” Greg and Justin have become “big proponents” of downtown living. From the St. Louis art scene to the restaurants, ballgames, Peabody Opera House and City Garden, they are thoroughly enjoying everything the Gateway City has to offer.